A blast from the past...

Below are a couple of pictures from my archives.

The first one was taken as part of a professional makeover, and I'm estimating that it was taken in 2005.   It was done by Hor Shots,  a chain of shops with one in a fairly small town in Ohio.  Guess there wasn't enough business, because that one subsequently went out of business.

You can see that I had a lot fewer wrinkles back then, and my skin was a lot smoother!  Plus, trowels full of makeup!  But it was then, and still is today, my own hair.  It was fun having the girls at the studio put it in hot rollers, then comb it out.  I have the pictures buried, and other than the crossdresser who was with me the day they were taken, nobody knows they exist!

Haven't had the nerve, the money, or the time, to try a makeover again...  As I recall, the makeover itself wasn't too costly, but the pictures "ate my lunch."  Not sure what the future holds...however, if dresses become my everyday outfits next year, I'll probably need several repeats, to learn how to look as good as possible - i haven;t been able to re-create this nice an appearance by myself.

And I'll end up with some current professional pictures - which can then be showed to anyone. 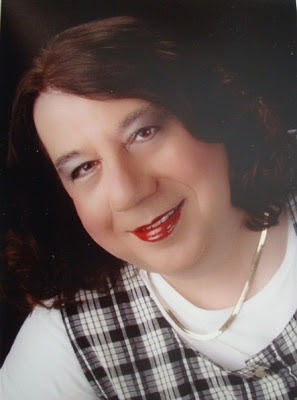 Having fun in a dress.

Following is a different kind of fun, and a picture that was taken with me in jeans.  Sitting in the engineer's seat of a steam locomotive would be tough to re-create, with me in a dress.  Actually, just sitting there wouldn't be a problem at all, but climbing up to the cab in a dress and heels would be the challenging part.  Bet a girl would have the attention of every male within eyeshot, waiting for her to return to terra firma. 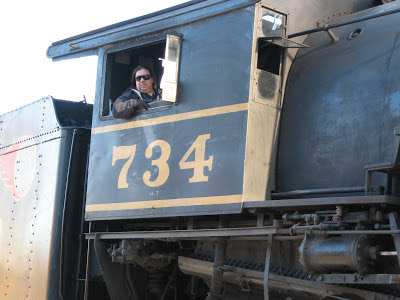