Fun is where you find it...

The train my wife was riding home from her sister's place a while back, experienced significant delays in recent weeks.  Enduring that type of delay would undoubtedly cause her to miss the connection in DC, and make her return to Baltimore so late that we would have to deal with rush hour traffic - and rush hour at the Bay Bridge.  (Often not a good thing.)  I didn't want to drive in that mess, and neither did she.  We both wanted to be back home quickly...if at all possible.

Our plan to avoid this situation was for me to go to an intermediate station several mid-day hours from DC the day before, and have her get off the train "several stops early" the next morning.  This would let us hopefully get to, and across, the bridge before rush hour, even with a late train.  We agreed on a time by which we'd communicate by cell phone to confirm that I had arrived in town.   And that left me free for some errands and sightseeing.

Androgynous was my errand presentation the day of my recent excursion to pick up my wife at the station....black top, gray shorts, pantyhose, flats and so on.  Makeup and lipstick but no other jewelry.   Dressed that way,, there were no instances of either "Sir" or "Ma'am."

Confusion can be a good thing!    After finishing my errands, I pulled on my red paisley skirt, and took off shorts...love those in-car cornfield changes.  And off to the hinterlands... 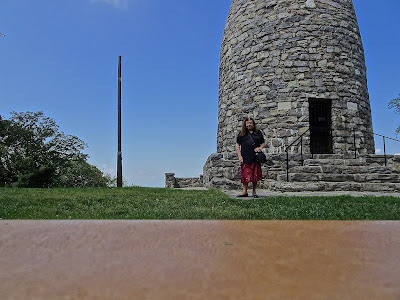 First stop was Washington Monument State Park near Boonsboro, MD.    Located atop South Mountain, it's the first completed monument dedicated to the memory of George Washington.  A rugged stone tower, it was initially erected by the citizens of Boonsboro in 1827. 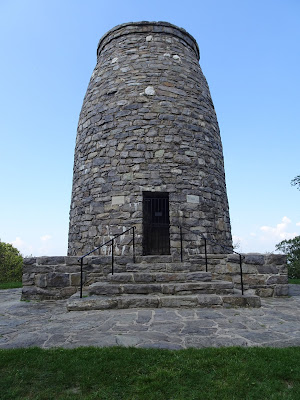 Interestingly,  it fell into disrepair , and was rebuilt at least twice, during its history - most recently by the Civilian Conservation Corps in 1936.  It is currently maintained by the Maryland Park Service.  Unfortunately the gate was locked and no entry into the tower was possible.  But it's still magnificent!

Lunch was quick and easy, at fast food...

Next stop was at a small, privately-owned cavern.  There, I was able to escape the 95 degree outdoor heat by going on a tour of the cavern, about 50 feet underground.  Nice and cool...with interesting formations and lots of dampness...the proprietor calculated that he was pumping out 100,000 gallons of water a day to keep it from flooding...and even so, one low passage was flooded. 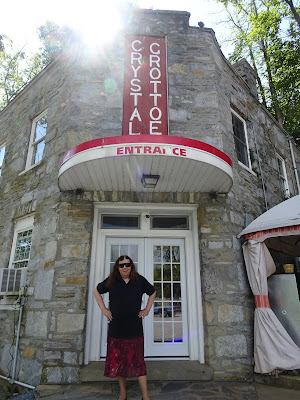 From there, I headed to a hotel in Western Maryland to await wifey's arrival by train the next morning...    And needless to say, I wore an "everyday outfit."  Mandy went back into the suitcase!

Mandy's day out was mostly successful, with only one known instances of being "clocked."   And since I'll never see that party again, who cares?

Fun is where you find it!

Posted by Mandy Sherman at 2:34 AM