Yours truly, standing on a balcony at the Marine Corps Museum in Quantico, VA on the last day of sightseeing.   During this visit, a number of the soldiers addressed my wife and I as "ladies."  I did not hear "Sir" - but there were a few instances of "non-gendered forms of address."  A very nice touch, considering that I was not in full Mandy form! 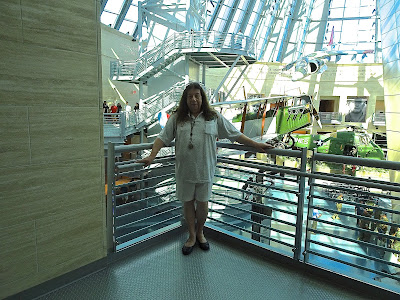 Displays and dioramas were fabulous, everything was marked and well-explained in the documentation.  If you ever get the chance to visit, be sure to do it!

We took the long way back home, going south toward Richmond to beat the DC traffic, subsequently heading east on a country road, then north on US 301, crossing the Potomac River on the 1.7 mile long Harry W Nice Bridge.   It's a narrow, antiquated 2-lane structure, and connects Newburg,
MD with Dahlgren, VA.  President Franklin D. Roosevelt participated in its 1938 groundbreaking.   And it is definitely not a "nice" bridge. One has to be extremely careful to not stray over the center line and hit oncoming traffic, or hit the side guardrails.   But we survived!  Good news is: its 4-lane replacement is being discussed!  A two-lane bridge with 4 lane highways leading up to it tends to be a classic bottleneck! 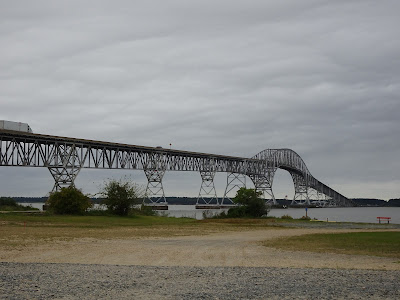 Immediately after descending the north side, I turned in to a rather uninviting gas station and followed a driveway back south, to investigate the following curiosity: 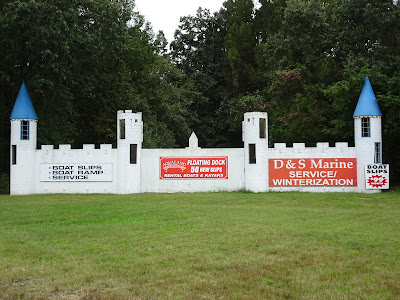 At first glance, it appears to be some sort of elaborate advertising gimmick.  Look again, more closely at the two center towers.  Notice that "wall" between them does not look the same as walls on either side.   That's because it was added quite some time after the "castle" was built...   And notice the real windows in some of the openings on the end towers with the blue roofs.  Very curious.

Upon investigation on-line, it became clear that this was built as the "grand entrance" to now-defunct "Aqua-Land Amusement Park."  The road (which no longer exists but can be imagined - look at the tree gap above the center wall)  passed between the two center towers and led into the park.

Following is a description of the park (and surrounding areas) from the Sept. 10, 1996 Baltimore Sun:

Vacation-style communities are part of a greater architecture and development trend called "themeing," in which communities are engineered to create a more enchanting atmosphere than typical suburbs, he said.

This vision of fun and fantasy was exactly what the Conner brothers, Dennis and Delbert, were after when they began carving Aqua-Land and Cliffton from the rural coast in Newburg in 1960.
Flights with free champagne brought Washington and Baltimore visitors to an airstrip at Cliffton for 24 unreal hours. Tigers and bears prowled in a petting zoo, a giant Humpty-Dumpty welcomed visitors to the children's theme park, Storyville U.S.A., and guests traversed the grounds via mini-trains.

The Conners dreamed of creating a "Las Vegas of the East" and building thousands of homes at their Cliffton on Potomac community alongside it. If visitors bought lots and stayed for good, the Conner brothers gave them free kitchen utensils.

"One fed the other," said Dennis "Dennie" Conner, 72, who now lives in Palm City, a retirement community in South Florida. "We did fly-ins and boat-ins and crab feasts that helped the whole development. We did a lot of promoting."

But the disappointments started coming early. First, they lost a choice spot on the shoreline to a PEPCO power plant. Then, they were denied a permit to dig a moat around the property for Jungle-Land. And after it was built, the biggest setback of all: Maryland began phasing out slot machines in 1963.

The community's "reason for being" withered and Aqua-Land died. It was just a bit too far from Washington or Baltimore to attract summertime crowds, too cold in the winter to attract retirees and too isolated for families searching for suburban conveniences.  The Conners sold the property in 1972. A series of owners went bankrupt throughout the next two decades in efforts to develop the land. Now, the county owns roughly 100 lots and scores more are scattered among different owners.

The land is all but deserted. Where a campground now sits, one dirty pet peacock scratches in a cage surrounded by RVs. Muskrats skitter across what used to be an airstrip. Honeysuckle grows over a cracked park pavilion. And brittle reeds fill the meadows where sky divers performed tricks in Aqua-Land's heyday. A marina built by the Conners is still open, but it does only a fraction of the business they had hoped.

At Cliffton on the Potomac, the neighborhood seems largely forgotten. The community's welcome sign on the riverbank reads "CLIFFTO." Nobody bothered to replace the N when it fell into the river.

From a mapping program, you can see that the airstrip has crumbled.  Views of the river are overgrown, and campsites/homesites sit empty.  Some nearby motels (which looked like they might have been decent "back in the day") are now abandoned and crumbling.  Only the modified and repurposed park entrance remains, mute testimony to a dream.  A dream which glowed brightly for a short time, and then was abruptly extinguished.

A rather melancholy end to an otherwise fabulous trip.