Not much happening here...Mandy's into her annual quiet season.   With the holidays, the end of December traditionally was very quiet.  Likewise the month of January and February will be.   There may not be a lot of posting activity -  wife and I may be doing some traveling together.  So any posting will unfortunately be mostly more local androgynous stuff.

I hope my followers (and readers who don't necessarily follow me yet) will bear with me.   Hopefully once the worst of winter is past us, things will make their usual seasonal improvement and Mandy will be able to get "back in the saddle again."   And hopefully you - and we - have a Happy New Year in the process....

One thing caught my eye on the internet recently, and it has nothing to do with gender or presentation.  Maryland's Republican administration recently announced that Interstate 95 and other major arteries around the Baltimore region could become a testing ground for driverless cars starting in 2018, under a proposal announced in the last couple of weeks.

"The state has applied for a U.S. Department of Transportation program that aims to work out the kinks in autonomous vehicle technology, speed its arrival on roadways across the country and help grow companies that are developing it."   Nice idea, folks.  I'm just not sure the area is ready for it...    If it were April 1,  I'd be very suspicious of an April Fool's joke.  But April 1 is still almost 3 months away, so it apparently isn't a joke.

Unfortunately, IMHO the idea is "kink-infested" from the get-go.   Can you imagine the difficulty of citing such a car for causing an accident?  How do you sue a driverless car?  Do they haul the car into the courtroom, and if so, how does it take the oath and testify?  If found guilty, how can the car be punished?  Disconnect its battery or drain its gas tank?  Put a "boot" on its front tire?  It's not alive...so punishments like that won't do any good.  Maybe reformat its computer or install an upgrade?

More hypothetical questions:  how will the autonomous vehicle respond to an officer controlling traffic at an accident scene or intersection with malfunctioning lights, or deal with a police vehicle trying to pull it over for a violation?   (These and  numerous other scenarios require instant judgment calls - and are not well-suited to AI - Artificial Intelligence.)

To inject a bit of humor into a serious topic, are the makers of those driverless vehicles planning to install a "prosthetic arm with it's hand's middle finger extended" in each dashboard and rear package shelf?  The purpose of this would be to automatically "pop up" in the appropriate window, each time the autonomous car cuts someone off, or a conventional vehicle's driver honks his horn.  Big city driving would not be complete without that feature...   And conventional drivers wouldn't know how to react if they didn't have something "flip them the bird" as they use the horn to warn the autonomous car about running the red light, blowing through the stop sign or making an improper lane change or turn.

Sorry for the rant.  But perhaps this whole "autonomous" thing is best relegated to the scrap heap,  before it starts to kill or maim people.  (Hopefully they won't spend much time over here on the Delmarva...quite yet.)

I'll leave you with a picture of this holiday decoration, seen while driving through a small town on the Delmarva.  And I gotta admit, this is a first for this type of decoration: 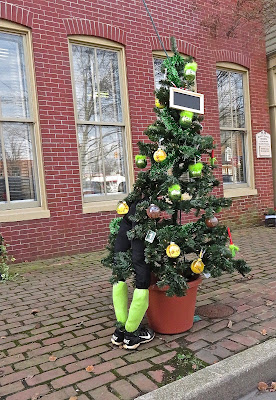 Posted by Mandy Sherman at 4:31 AM