We're back on the road again...

On our way to attend a convention near Indianapolis, and visit the kids in TN, we stopped at a place called French Lick Resort. Years ago, we had visited with the antique car, as part of a car event, but ever since, have wanted to come back again.

The drive west from the Delmarva was a bit checkered...snow in the mountains of western Maryland had turned to rain by the time we neared the first overnight stop just north of  Charleston, but it slowed our progress a bit on the first day.   Of course that didn't stop at least a minor amount of "unusual town name hunting."   First stop on that hit parade was Friendsville, MD. 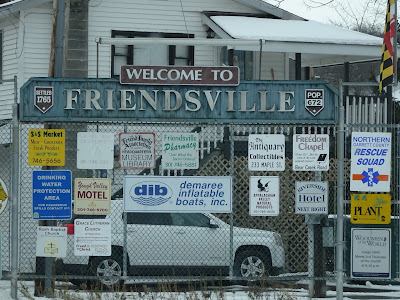 Founded in 1765  and named after its founder John Friend, it used to be a center for the lumber (and nearby, coal) industry.   Now, it just appears as a "friendly" rural town.

On the second day, we passed into warmer air (though still cloudy, something which remained for the entire trip), and temperatures climbed into the range of 60 degrees - even though it rained hard off-and-on.  I noticed signs for a town named Big Chimney near our hotel, and wanted to check it out.  Yes, there actually is a small town, with no evidence of the two railroad lines which used to serve it...the PRR and the B&O!   Rights of way are well disguised, since tracks were torn up fifty years ago, and there is no evidence of any remaining  industry in town... 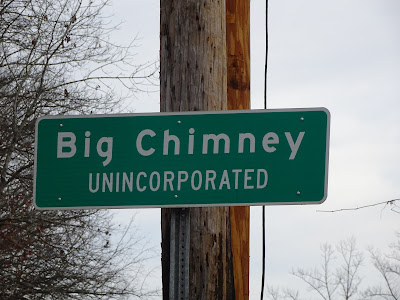 Turns out there used to be two "industries" - some oil drilling in the area, and a salt works.  As part of its process, the salt works erected a - drum-roll please - "big chimney" about 60 feet tall.   The plant went out of business about 80 years ago, and with no maintenance, the chimney succumbed to the ravages of nature.   Depending on the theory to which you adhere, it either collapsed in a tornado, or was pulled down as a dangerous, brick-shedding hazard, about 70 years ago.

After grabbing a couple of pictures, it was "on the road again."

As usual, on this type of road trip, dresses and skirts weren't part of my wardrobe.  But in stirrup pants with flats, tights, a turtleneck tunic with necklace, my purse, long hair and nails, folks there treated her as a lady.  That first night at a chain hotel north of Charleston,  Mandy was back, even without dresses.   My wife and I were addressed as "ladies" when we were together, and I was addressed as "Ma''am" by the staff when alone.

On to our second night's stop at the West Baden Springs Resort in French Lick, IN - with the "pump already primed" from our first night's stop.   From check-in at the West Baden Springs, to walking around sightseeing at this immense and impeccably restored monument to a better day, visiting some of the shops, we were generally addressed as "ladies."  (Or in a few instances, with no gender reference to either of us.   But that's OK...) 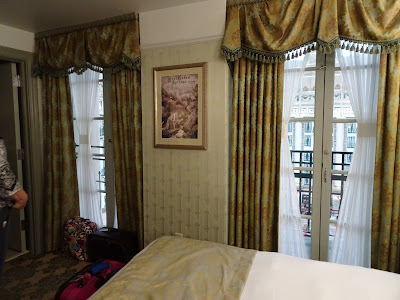 Our room on the top floor, overlooking the atrium. 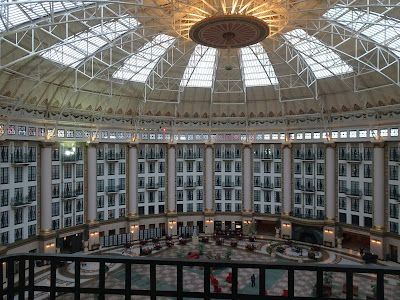 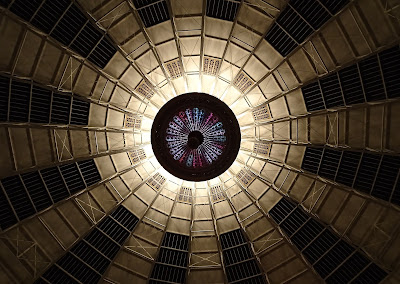 This was a fabulous hotel, built in the early 1900's with a free-standing dome (no mid-dome supports, designed by a bridge-building company) that, for a time, was the largest dome in the world.  Imagine a world-renowned domed hotel "out in the middle of nowhere."  And with a lovely porch for sitting and enjoying the local gardens, mineral water, and scenery (preferably in better weather, however.)  And even more amazing is the fact that it still exists today, after serving as a Jesuit monastery and a college campus, followed by years of neglect, abandonment, and partial outer wall collapse.

When we checked out of this hotel, we drove about a mile down the road to the French Lick Springs Resort and Casino...

Stay tuned for more about that....