Several days ago, I had to visit my optometrist in the mall for a routine yearly appointment.  I was dressed as in the below picture (which was taken in the family restroom before my appointment.)  And once again, every peddler (both male and female) at every kiosk I passed,  addressed me as female and tried to give me their "free demonstrations and samples."  Wow - do they ever look crestfallen when I say "no thanks" and walk on.  Whether I soften my voice or just use my male voice depends on how persistent they are...soft the first time I say "no thanks" but after their second try it's often in my full (loud) male voice.  I don't look back to see their expression - I don't really care!

Nothing noteworthy happened at the optometrist, where they know me as a guy regardless of my appearance, save for a discussion about how most young girls tear their contact lenses or scratch their corneas with nails as long as mine, forcing them to shorten nails on their "pointer" fingers.   Then they watch me remove the old ones and insert the new ones, where I point out that I've worn them for about 30 years.  And nothing more is said... 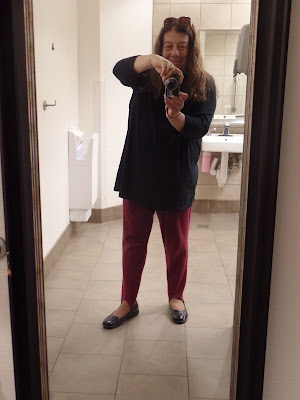 At an appointment with our banker (female), in which I wore women's denim leggings with a turtleneck blouse, she confided to my wife and I that her assistant had somehow gotten the idea I was 30 years old.  (Wrong! it's more than double that...)  From her glances at me as we walked in, which she probably thought I wouldn't notice, I suspect that she also misinterpreted me as female...maybe because of my now-female given name.  But that little morsel of info wasn't shared with us by the banker.  Needless to say, this made my day, and week, probably month as well...even though I know all too well, that in reality I don't look 30something...LOL!

And finally...Mandy got a chance to see the light of day.  YAY!  Yesterday I took the antique out for a many-hour test drive (one very long day), to see how it runs after all the work on its carburetor.  The good news is: it ran fine, with only one more small adjustment needed.  And the gas mileage seems to have improved...a lot.

This was Mandy's first excursion so far in 2016.   I left the house in light makeup but no eye liner or lipstick, with a typical everyday spring outfit of black pedal pushers and a blue turtleneck (which is roughly the same color as my new blouse to match the skirt.)  Very convenient, as I was able to slip my long skirt over the pedal pushers (love the long and looser skirts - especially in cool weather) in the car, apply lipstick, and add my pearl drop earrings and bracelet - all by the side of the road, an hour out.  That was my attire for the rest of the day...till about the same point on the return trip.

But the really fun part was: the admission attendant at my destination might have made a pass at me.  (Dealing with men paying attention to me is a very unfamiliar subject.)   When I drove up in the old car and showed my National Park pass from the driver's seat (and the attendant couldn't see what I was wearing - other than my long hair, long, shiny nails, turtleneck, lipstick, Mom's necklace, and  my paisley-skirt-covered lap)  he smiled from ear to ear (a friendly one, not that sarcastic "A-Ha!" smile) and asked "is that your Pass, Miss?"  I assured him it was and offered to produce my ID - "the same ID I used when I obtained it."  He smiled again and said "It's just that the car might qualify, but you look too young and attractive to have one.  No need for your ID.  I believe you.  Go right on in, and have a nice day, Miss."  With more smiles...   "Thank you, sir, I certainly will" and I moved on.  (Would he ever have gotten an eyeful from my ID - with that big "M" on it....)

Was it a "pass," simply flattery, or did he really think I look younger than my actual age?  If the banker incident hadn't occurred, my inexperienced bet would have been on "a somewhat lame pass."   If it happens again anytime soon however, I'll begin to wonder...

The weather was windy all day (as usual) but very nice.  Here are a couple of pictures from the day... 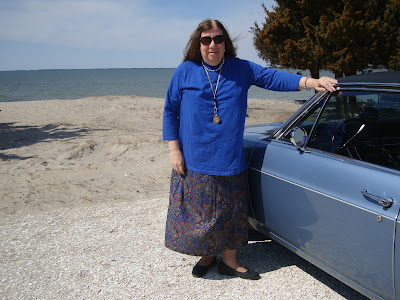 Assateague Island.  Much too cool and windy to even  try to pose as a "beach babe." 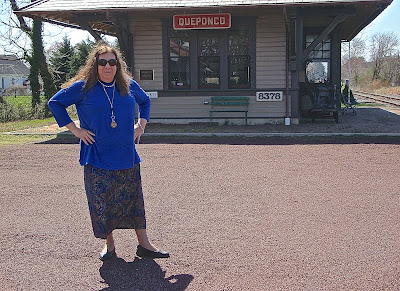 At the old PRR station near Newark, MD.  Yes, Virginia, there really is a Newark in MD, as well as DE and NJ!

But now my skirt disappears for a while...

Mandy
Posted by Mandy Sherman at 4:20 AM