With apologies to Bobby Freeman...

Back in 1958, he sang "Betty Lou got a new pair of shoes..."  This year, it wasn't Betty Lou, it was Amanda Nicole...  Unfortunately, that doesn't quite rhyme, so it won't end up in a hit song.   And, they weren't exactly shoes - they were sandals.

How this all came to pass was a bit un-conventional.  My wife and I were sitting and talking, while the telly was on in the background, tuned to QVC.  These Clarks sandals were being shown, and as I glanced up, they looked fabulous on the female models wearing them.

While it had nothing to do with the topic we were discussing, I commented that QVC had my size, the sandals looked really good, and they might be comfortable enough to wear all day.  "With all the detailing on them, they're women's, and definitely feminine.  But then, so are your capris.  If you spend that much money for a pair of women's sandals that fit you, there's absolutely no reason whatsoever as to why you shouldn't wear them every day, with cute capri outfits.  At least till fall,  you won't need your stirrups, ballerinas or pantyhose." 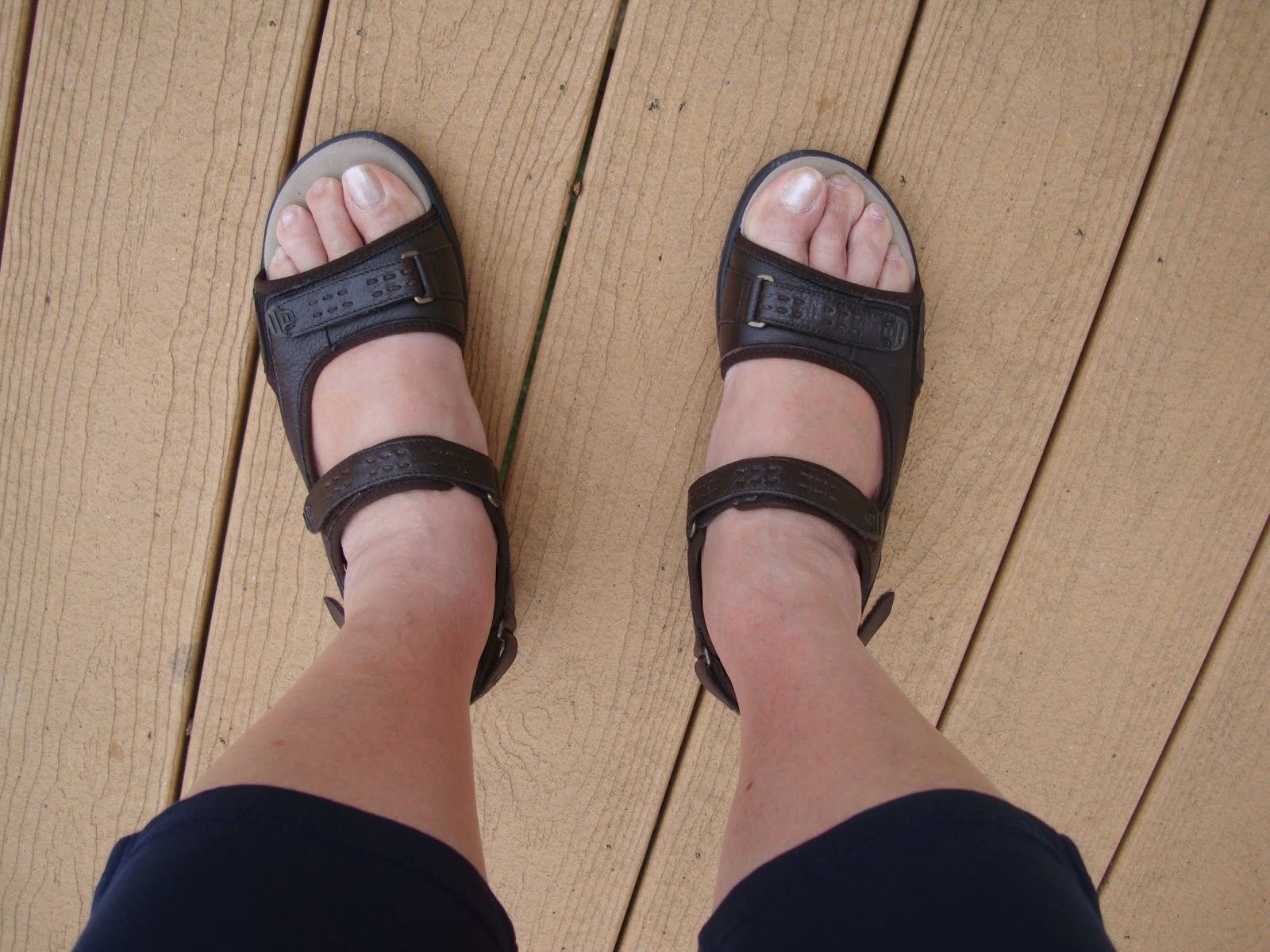 My take on it is that she really wasn't in favor of me ordering them.  But no new ground was broken with her "ground rules."  I'd still be wearing clothes I already own - ones she knows that I wear, and that I'm very comfortable wearing.  Almost sounds like a home-brewed version of "if he HAS to do something, he won't like it and this issue will go away..."  But how good are the odds that it will work that way? 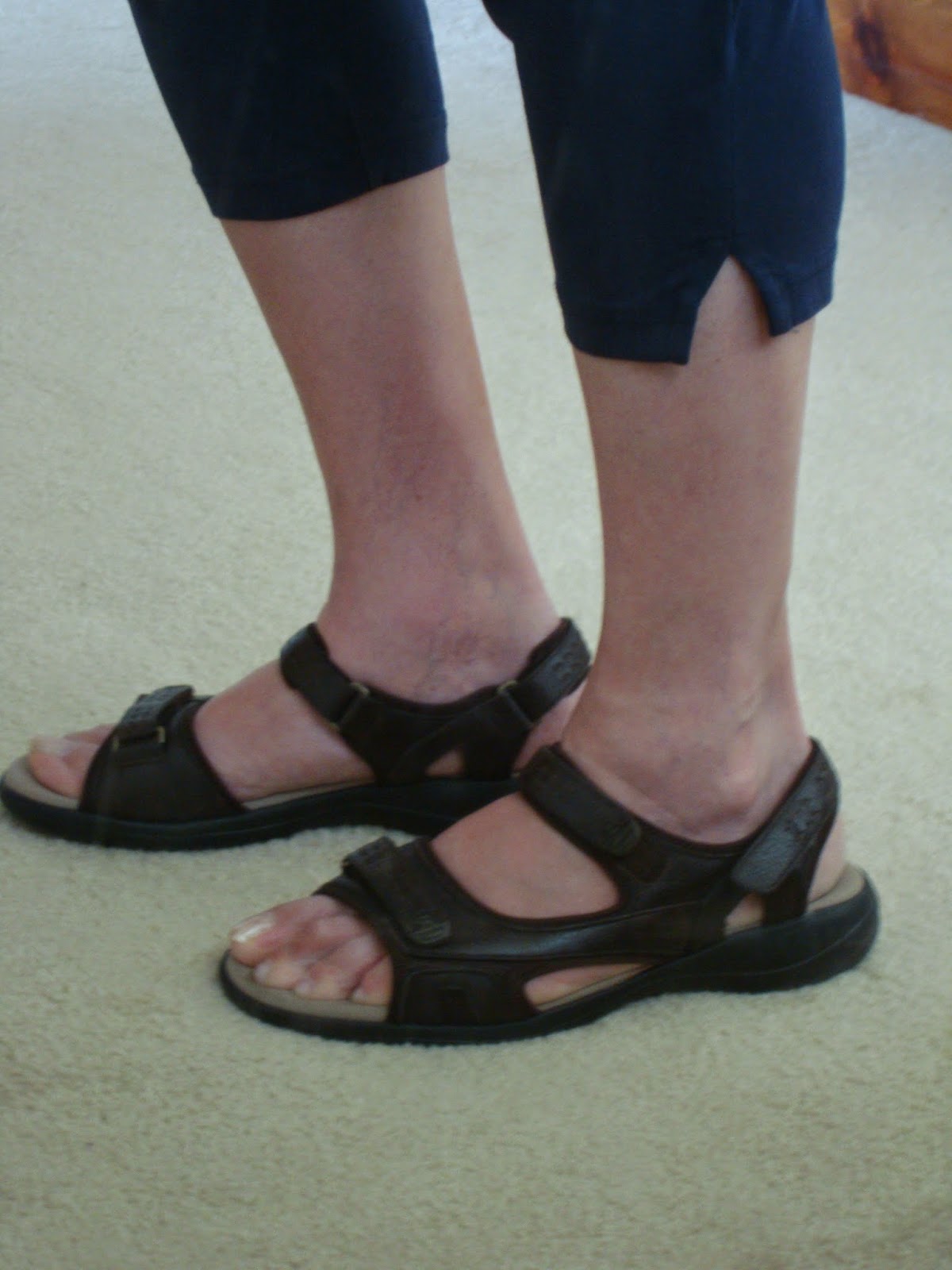 I did some research, and found a coupon for 20% off from another vendor, with free shipping - I hate to pay full price.  Needless to say, I ordered them.  When they arrived, I found they were as comfortable as they looked on the telly. Adjustable straps made for a perfect fit.  I wore them around the house (with my capris) the rest of the day - no issues and no comments whatsoever.

The next morning, I put them on again - with capris - and told my wife they still felt fabulous, so I was keeping them.  Her comment: "I've kept quiet, so you could make an unbiased decision.  They're clearly feminine but they do look nice on you, so keep them.  But from here on,  hold up your end of the deal.  Your outfits will be sandals, capris, and blouses or tops.  Occasionally, you've been wearing makeup.  Now, it's always necessary, whenever we leave the house together.  Once summer actually arrives,  experiment with shorts and tank tops - girls wear them a lot in the heat.  And, you'll end up with a nice tan on your arms, shoulders and legs."

"There will be a few occasions when I want you in stirrups, pantyhose and ballerinas, with no makeup.  I'll always tell you - trust me, I won't forget. And that's always my call, not yours.  If we're going somewhere together, and I don't say otherwise,  just wear a cute capri outfit and paint up your face like I know you can.  No bargaining, no excuses.  Twice a week for our errands, I'll wear my capris, too.  Then when we're addressed as "ladies" by a clerk, as so often happens, both of us will 'look the part'.  Come cold weather, you're going to love capris so much that you'll hate to put them away for the winter!"

Truth of the matter is: that's already an accurate statement.

At this point, my plan is to concentrate on keeping my legs silky smooth, and probably get more frequent pedicures.  I sure won't be able to hide my toe nails in flats any more - or my legs below the hem of whatever I'm wearing. 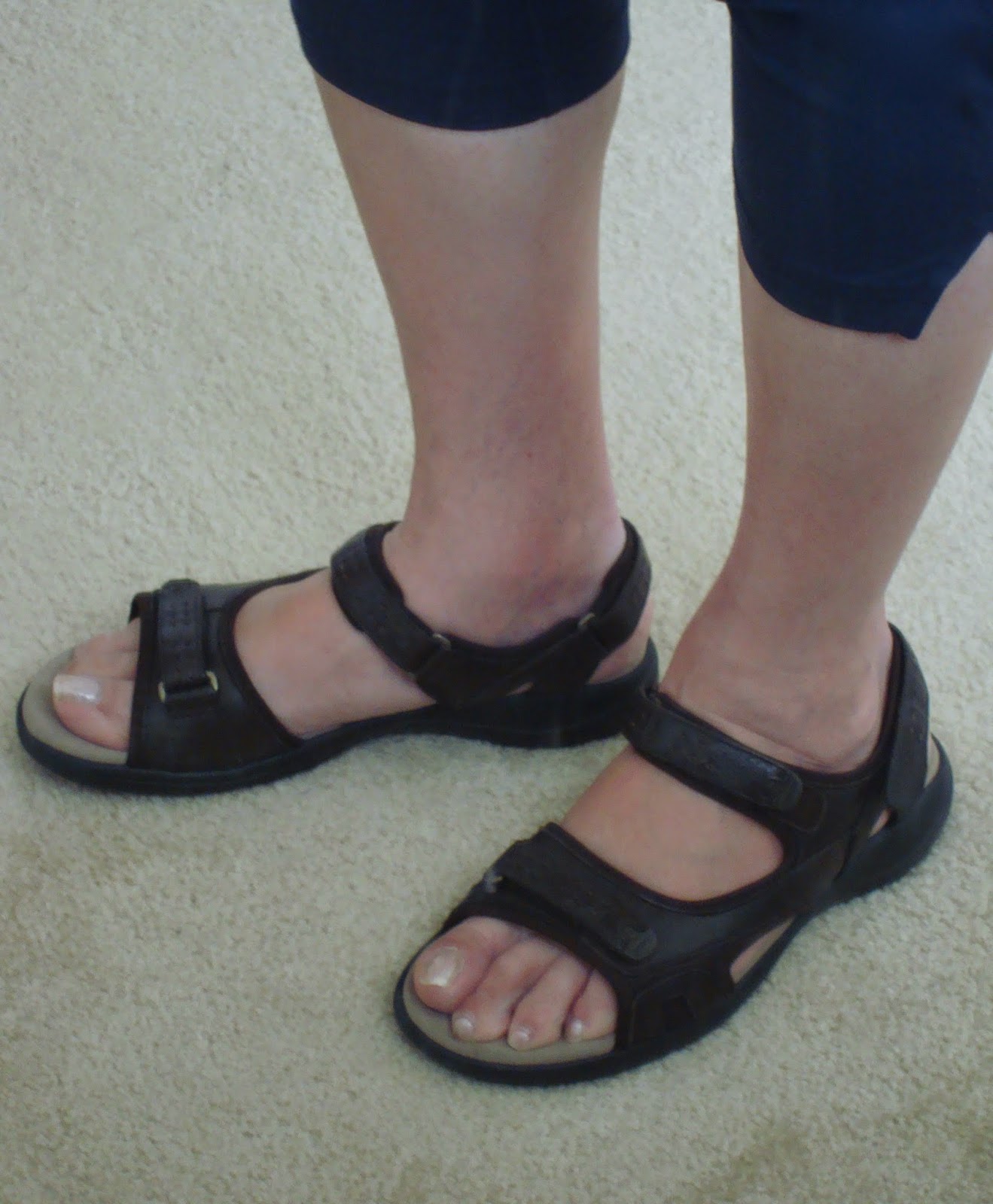 Segue ahead:  almost a week has passed since I began wearing sandals and capris every day. It's really a complete non-issue:  both are incredibly comfortable.  One of the female residents at the nursing home already told me that she liked my capri outfits with silver toe nails! "But honey, you need to tell your nail girl to do them in a brighter silver, so they show up better."  One of the staffers suggested that I start wearing bright red toe nail polish...  "That way your legs and feet will look their prettiest and most feminine, every day..."  I really love getting sincere positive reinforcement from other females...especially the ones who see me daily.  Just not sure about the red polish...

News flash...we just recently found out that our son is flying home for vacation, and bringing his girlfriend with him to meet us - for the first time, no less - starting the end of the week.  So this will may be my last post until after they leave.  Stay tuned...
Posted by Mandy Sherman at 3:41 AM