You may recall that ever since a cas show last spring, my antique car had carburetor issues.  Getting them repaired was a major task, since most of today’s mechanics are trained on fuel injection systems and computer controls.  Being a 1967, mine has neither, and to complicate matters, it also has an intact prehistoric California smog control system . Fuel-injection and computer emission training is useless on old-fashioned antiques.

And trying to make a 1,200-mile trip in a freshly-repaired car, without some significant shakedown runs, would be a "real fool's errand."  Thus I decided to take the daily driver on this trip, and extend our agenda exponentially.  What started out to be a simple antique car tour for my better half and myself, with a bunch of friends, ended up being anepic vacation.  We were gone for so long (two full weeks) that it was easy to lose track of time!


With my love of ferroeqinology, I had been wanting to visit the Saratoga & North Creek, a tourist line which recently began running on the formerly abandoned Delaware & Hudson line in upstate NY, between its namesake towns. With some friends, I had visited the line during its abandonment and wanted to ride now that it was back in operation. This vacation seemed a perfect chance to do so. But the better half preferred not to spend most of the day on a train, or be stuck in a small town near the Gore Mountain ski resort during the layover  So, we compromised - I would ride the train if I could find a motel that would let her go into downtown Saratoga for shopping local sightseeing.  And I did.  So, with that, Saratoga was added to our vacation itinerary.

The day was to be cold and windy, so I pulled out the denim jean leggings I’d worn a couple times earlier in the vacation, with a turtleneck, pantyhose and flats.  I wore my new makeup – all except the eyebrow shaper, eye shadow and blusher, and thought it once again covered my beard shadow well.  So, off I went, into the unknown.

No issues at the Saratoga Springs Amtrak station... 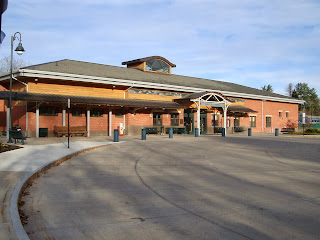 You can see the train I rode, on the far right edge of the picture, waiting for an Amtrak train to clear the station before boarding passengers.


When the excursion train boarding time arrived, staff used the appropriate pronouns and addressed me as a female.  My seating was in first class, so they directed me into the dome car.  There were 3 people already seated at my table (one guy, two gals, all related), and I became the fourth.  We introduced ourselves, by first names (I used my regular first name, which is now used by females), and I softened my normal voice, but only a little, in hopes of being able to stay consistent all day.  From that point on, my table mates presumed (or at least treated me as though) I was female.

They asked me to take a picture of them with their camera, which I did, and one of the girls reciprocated for me.  They continued to treat me as a woman through the entire trip.  After brunch, when one of the girls wanted to take pictures from the rear vestibule, she asked me to join her...which I gladly did. 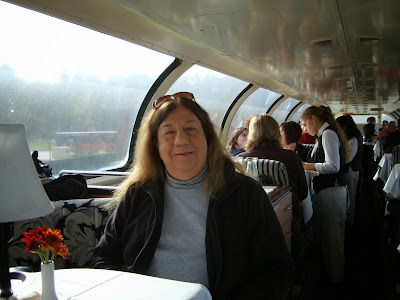 Mandy in the dome car on the excursion train...

On the dome car, the women and men each had separate restrooms.  However, shortly after departure they took the women’s room out of service, so everyone used the men’s room.  And there were unisex restrooms on the rest of the train.  I had to use them several times to reapply my lipstick and powder my nose.  (Sound familiar, girls?)  Unfortunately most of the other women – including my table mates, weren’t wearing makeup, thus I didn’t get invited to join them in the restroom!

Upon arrival in North Creek, there was a bus waiting to take us to a local shop or two, that were too far out of town to reach on foot.  When we got back into town, everyone started visiting the local merchants.  (Where, when I needed a restroom, I was directed to the women’s room.  Which I used.)

Some folks came away from their shopping with lots of “finds.”  Others, like yours truly, bought little or nothing.  A number of women chatted with me while we were waiting to re-board the excursion train.  Their husbands also treated me as a female, and one of them even gave me the seat next to his wife in the station, “so you girls can talk.”  Wow - that's a first!

I actually ran into one person I sort-of knew from attending a past conference, now working in the staff at the railroad.  He acted totally normal toward me, but obviously noted my femininity as he was careful to not use any gender-related words.  We talked for a few minutes, then he had to move on.  (I wonder what repercussions will eventually come from that?) 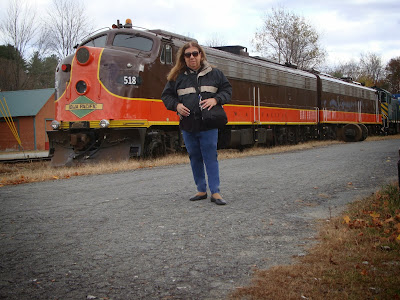 Vintage E-units, and vintage Mandy, at the rail yard in North Creek, NY... 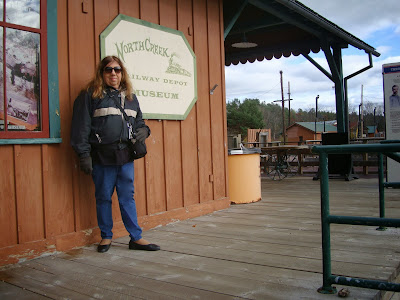 Waiting for boarding at the station in North Creek, NY...
Our return train departed on time, and since my new friends, including the girl with the camera, wanted to be near a dutch door or clear window for taking pictures of tthe sights, they elected to move to one of the almost-empty coaches - with sparkling windows.  Needless to say, after some hot soup in the dome, (to warm up after walking all afternoon in the cold), I joined them.  And we had a fun ride back...our new little traveling group!  After a toast to a fine day with my new friends (who know me only as a woman – a big first for me), the girl with the camera and I kept running to the open dutch doors in the vestibule and amassed many pretty pictures, since the sun had finally come out. 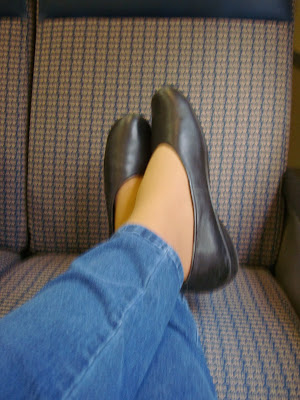 Relaxing on the train, after an afternoon shopping...

Before you ask, no, I'm not naive enough to believe my traveling companions (and also some, if not all, of the folks I interacted with) didn't realize that I was a CD'er or TG.  That would be a huge stretch of the imagination.  But it was wonderful to realize that so many people could be so accepting and caring.

When I got back to the motel after the excursion,  the better half and I decided that dinner was in order.  My makeup still looked fairly good (with just a bit of touch up),  since it was dark outside.  As we walked toward the lobby on the balcony by the pool, I was shocked to hear “Hey, it’s the Train Lady!!  Hi there (insert my real but feminine first name here)“ from the ground floor below.   I looked down, amazed, and recognized her so I waved back and said “Hi!  Didn’t realize you were staying here! Looks like this is a great motel for us train riders!” as we headed for the door - the better half and I were both hungry.  “Gotta run.  So have a wonderful evening!”  “You too...” And we moved on, looking like two ladies heading out for shopping.  The better half again made no comment.

Absolutely nothing was said about the exchange during dinner, which really was just a recount of each of our activities during our busy day, quite ordinary discussion-wise.  I just "neglected to mention" that I had somehow managed to be accepted as female all day, without wearing a dress or seriously feminizing my voice, and she didn’t ask me about it.  (Maybe it's a domestic version of "Don’t ask, Don’t tell"????)

And, to add icing to the cake, both the greeter and server at dinner addressed us as “ladies.” The server asked if we wanted separate checks, which the better half declined.  When our server brought the check, she placed it on the table so that one of us would actively have to reach for it, instead of handing it to “the gentleman” – since there obviously wasn’t one present!

A perfectly fitting ending to a fabulous day...as well as a picture-perfect vacation – that I think even pleased the better half.  And I may have just helped myself “kick the closet door open” a bit wider for public events...   The most important take-away:  as Marian has pointed out,  I don’t necessarily have to wear a dress or skirt in order to be recognized as female – and that’s good, since cold weather typically cuts down on numbers of females in dresses.

I’m certainly finding myself feeling more confident as a woman...and that’s a good thing!   I've corresponded by email with all 3 of the folks, since returning home.  Perhaps we will meet again someday?

I hope so, but time will tell.

Posted by Mandy Sherman at 2:42 AM