Here are a couple quick shots from a trip to Utah in September of 2012...a massive bison, ambling along the highway in Yellowstone National Park...and one of a different bison, ambling through a parking lot at one of the thermal features.  Oh my, it was a fabulous trip!  'Tis not often possible to see this much wildlife up close without being in a zoo... 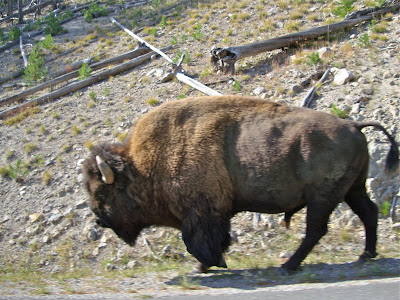 That's a lot of Bull! 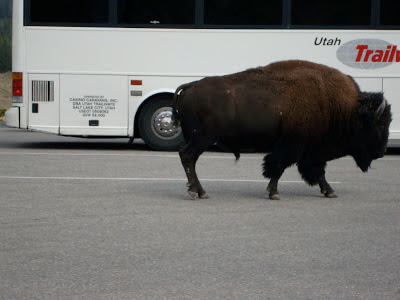 This guy attracted a lot of attention from the folks in the bus!

The past few weeks haven't been favorable for any female presentation, or even any substantial blogging. Maybe the "pink fog" has faded a bit?  Perhaps, but more likely it was that life's daily events (not connected with dressing or gender) simply made it more convenient to look like a casual androgyne every day:  capris or shorts, a sleeveless or sleeved top, flats or sandals, and a purse, with light, or no, makeup.

We finally wore out  the old "daily driver" automobile...at 198,000 miles, the engine and transmission were running just fine, but it had developed too many other issues to attempt to repair.  So, new car shopping became a high priority. (I hate new car shopping with a passion - so we drive them till they stop.)  At least it was the right time of year for that...I just would have liked to watch it turn 200,000, but that wasn't meant to be.  And the issue is now solved.

My laid-up-for-repairs antique car has prevented any out-of-town trips.  And even posting here has suffered - but the latter is partly for a good reason:  my nails.  Some of them have grown out to 3/8" and the rest are at or over 5/16" beyond my fingertips, with many having an overall nail length of nearly an inch from the cuticles to the ends.  I love them, and my long talons feminize my hands.  But finally they've grown enough to make touch typing a challenge. You don't want to know how long typing this little blog - as carefully as possible -  is taking!

Administrative assistants who have long nails deserve complete respect for their appearance and abilities - typing, and even filing, is a challenge!  So, unless my nail tech decides to cut them at my Thursday fill appointment, I'll become intimately familiar with spell check and the delete key!  I can request she cut them, but since she's the professional and wants my hands to look pretty, she makes all the length decisions for me.  And I think I know what her decision will be - last time, she didn't shorten them at all.   I guess I'd better be prepared to learn the knack of accurate, fast typing with my feminine nails. 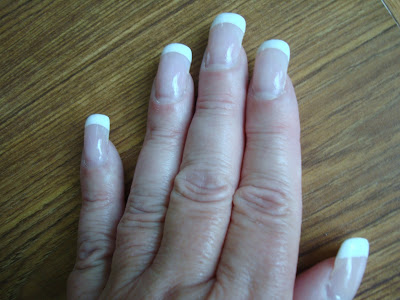 What color do you think would look best???

But the decision she and the other techs want me to make, which I keep deferring, is a color for my nails.  I like the Pink & Whites, but they want to see me with something more noticeable, perhaps matching an outfit.  For now it's going to be status quo, but what do you think would eventually look nice? 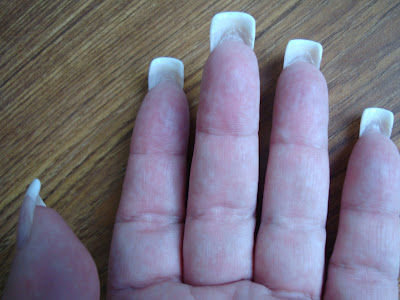 They gently but noticeably click on each other as I move my fingers, and also on any hard surfaces I touch!  So feminine...

The bright side is that the lady in the nursing home who enjoys looking at my legs still compliments them every time she sees me in shorts and nylons with my flats. And lately, even when I'm in capri pants...

Guess it never hurts that I stop and talk to her for a bit...