"Those cute ballerinas really make the girl, you know!"

And it all began with the first of about 4 days of sightseeing, among a group of acquaintances... 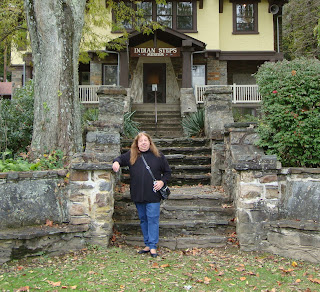 First time out wearing my new girly shoes "among a large group of people who know me", on the first day of what was to become my most feminine vacation so far...

My ballerinas (the better half prefers to call them that, since ballet flats sounds too masculine) and a pair of skimmers were the only shoes she allowed me to bring. "You won't be wearing any others, so why carry them? Just leave them at home."  That was fine with me.  And she "suggested" that I wear a lone pair of womens' denim leggings, in addition to bringing a good assortment of my stirrups.  OK, fine, too...my mind said "no point in making the change to girly all at once..."   So, it appeared that denim would still an option, at least a couple of times during the trip..  She apparently was anxious to see any reactions by our acquaintances to my feminine footwear, before I started wearing them with my stirrups.

Happily, I wore my ballerinas all day and evening.  And, it turned out to be a complete non-event! There were no consequences, no comments to either of us, and at least to my face, no "looks."  So far, so good...

But, at dinner, I managed to spill food on my leggings (as I mentioned, they were the only pair in my suitcase), making them unwearable again till washed.  Spilling food isn't normally a big deal - you just change clothes, right?  I wonder if anyone noticed my red cheeks while I was trying to clean myself up?  I already knew what I was going to be wearing for the rest of our vacation... 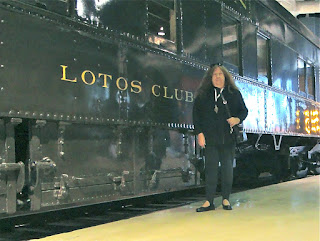 The second morning, my better half actually got dressed first (jeans and blouse, with sneakers), while I snoozed.  That prepared her to become an enthusiastic observer as I pulled my turtleneck blouse over my head, rolled my usual suntan pantyhose up my legs, pulled on a pair of black stirrups, and stepped into my ballerinas. "Honey, I love your cute new ballerinas, and I'm thrilled that you're now wearing them every day.  It shows me how much you really like them!" I didn't think it would be particularly tactful to remind her that she really had left me no choice, since they (and my skimmers) were the only shoes she let me bring.  But I love wearing them, and like how girly they look, so it didn't matter.  I simply replied, "Thanks!"

"Yes, ballerinas really make the girl, you know? And your feminine stirrup pants display them so nicely.  The only thing more attractive, would be for you to wear short, casual denim skirts to show off not only your ballerinas, but also your legs!  But...that will come later." (This is added in retrospect:  Re-reading my blog, those last two sentences were a sign of things to come, which escaped me at that particular moment!)

If the truth be known, I blushed...deep red. Wonder how (or if) she's referring to my denim skirt - the one I have stashed away, in a locked suitcase? Fortunately there were only a couple of lights on and she probably didn't notice my red cheeks. "Now grab your purse, honey, and let's get moving. We have people to meet and places to go." And together, we walked downstairs to meet the others.

During the day's activities, I got a few looks from some of our lesser-known acquaintances, but there were no comments. Everyone in our group was as nice as usual. We socialized with many people. Miss-identifications were only from folks who didn't know me...people other than those in our group.

A female friend in the group took this picture for me. She thought it turned out quite well, and told me that my outfit was very cute! "With your beautiful long hair and pretty nails, you really should be dressing like this all the time." I didn't bother to tell her it was already under way - she's probably figured that out.

If not, she's going to find out for sure in due time, especially if (or maybe it's when) I end up in dresses. Out of the group of 45 couples with whom we were sightseeing, nearly half the women wore a skirt or dress at some point during our vacation, mostly for dinner. During the day, I'd definitely be one of the few girls with my legs on display.  But as the girls at the nail salon keep telling me..."Once you wear dresses every day, you'll eventually learn to love having guys (and gals) staring at your legs.  And, when you've reached that point, you won't go back into pants even if you're allowed to."  And after rereading, this may also have been an unrecognized-at-the-time forecast of things to come.  Time will tell.

There were no restroom issues...most places had unisex toilets, and the few others that didn't found me talking with the guys as we walked right in the men's room door. So there were no real problems.  The only issue at one place where I was not with friends in the men's room - a guy came in, saw me, and made a generic comment, to nobody in particular, about the "woman in the men's room" - just as I disappeared into a stall.  I said nothing, and he "took care of business" and left, with no further comment.

Late in the evening of the third day of the trip, my better half mentioned that I finally looked like I was no longer self-conscious of what I was wearing. She asked for my thoughts on my new everyday appearance. "Yes, I'm fully comfortable wearing these outfits, and yes, I'm enjoying our vacation, even dressed as I am. Having no choice but to look this feminine has taught me to go about my business, respond as a woman, and quit worrying about what others think. That's what I'm doing, and I've really been enjoying getting compliments from the girls."

Judging from the big smile, I think she liked what she heard! 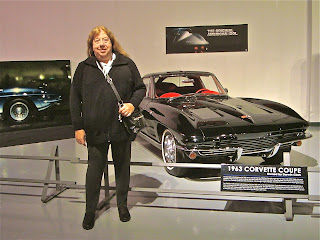 Maybe a split-window Corvette for my next car???   No, probably not...they're a chick magnet. Oops, it slipped my mind - I seem to have become one of them! Guess I'll have to stick to looking at
Corvettes belonging to the guys!

The better half surprised me by bringing a pair of black pantyhose along for me to try. Notice my ballerinas and stirrups with sheer black pantyhose underneath? Look again, they're hard to see!
I personally like the look of dark stirrups with black nylons. But, apparently she didn't. Her "suggestion" is to save them for cooler weather, when can I wear them under my white or tan stirrups, or those very few occasions when I may need to appear a bit less feminine, since they help disguise my exposed ankles and girly shoes. "But once these are gone, rest assured you won't be getting any more dark pantyhose."

"Honey, today you look too much like a guy. Since you're a girl wearing ballerinas and stirrups, from here on, you need to make sure the shape of your ballerinas, your instep and the backs of your heels are always plainly visible to everyone under the arches of your stirrups. Wearing black nylons and dark stirrups, they aren't. I really want you to stick with nude or suntan pantyhose." And she may well be right...while I was wearing dark pantyhose with dark stirrups, there were no Miss-identifications!

I assured her that henceforth I'll only wear dark pantyhose under my light-colored stirrups, during the fall and winter, (at least till they're all worn out) and always wear nude pantyhose with dark stirrups. 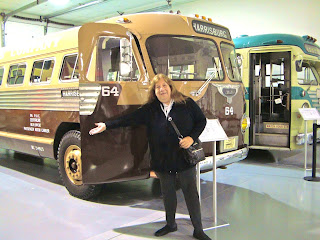 Next Bus to Harrisburg!!!!

Love this bus...very stylish and retro! And it would make a fabulous motor home conversion! 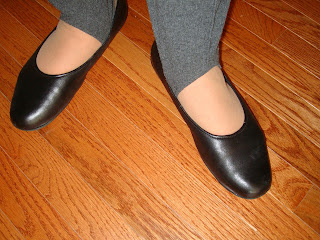 Our friends were fine with my attire, though by now, I noticed them starting to use a few less gender-specific pronouns for me.  I wore these skimmer flats to dinner a couple evenings, during the day once, to try out some different shoes, and to the big banquet at the end of our vacation.  On the way down the hall at the hotel this morning, every female I encountered smiled and said hi.  Plus, one of the girls addressed me as "Miss," while we were walking down the hall and chatting.

It's great to be a girl!

Since having the vacation described above, my antique car and I recently attended a fairly large car show.  There, I wore one of the same outfits pictured at the top of this blog (turtleneck, black stirrups, nude pantyhose, and ballerinas) plus light makeup.

As has happened before, the first time I used the restroom (in this show, they were porta-pots), the guys certainly didn't hesitate to remind me that I was in the wrong line.  One of the more chivalrous younger guys was apparently tired of listening to the comments, so he decided to help me out of there, and gently took my hand in his. What surprised me was that he interlocked our fingers (like I've always done with girls) to make it clear he was the one in control, not me.  Standing there with him firmly gripping my hand, I wasn't in any position to object, so events unfolded just as he planned - we walked shoulder-to-shoulder and hand-in-hand, to the end of the long line for the nearby women's porta pots.  That was definitely a first for me! Then he released my hand, stopped for a moment and smiled, then returned to his spot in the line for the mens' room.

Once he left, the girls were chattering that they thought he was an attractive enough guy, and that it was very gentlemanly of him to make sure I got into the proper line.  Several girls suggested that in the future, I should forget about using the men's room, and just go to the line for the women's room.   One of the younger girls whispered in my ear "Missy, dressed like you are, you belong over here with us instead of with those rude, crude guys.  Your Mr. Right did you a big favor, and you should have rewarded him by wrapping your arms around his neck and planting a lingering, passionate kiss, right on his lips...didn't you notice his hesitation there at the end?  That was his way of giving you the chance, and it would have made his male friends so very jealous!  It's too late now...but these are thing you'll need to learn about."

"You're much safer over here, and we don't mind.  Just remember - our restrooms and even porta pots are much cleaner than theirs, and we like them that way, so you ALWAYS sit.  Got it?"  Not sure how I should answer her, about all I could say in response was "Yes, ma'am, I promise!"  Her response:  "Good.  By the way, those are cute ballet flats.  Where did you get them?"  So, with the girls attentively eavesdropping, I told her how they ended up becoming my everyday shoes.  After hearing that, the girls included me in their conversations: which cars their husbands or boyfriends had entered in the show, fashions, hair styles, etc. The line was long, so when my turn to use the restroom eventually came, I respected their wishes and made sure to sit!  For the rest of the day, I used the women's porta pots, without issue.  And a couple of the girls came by my car to chat...since their guys were preoccupied with their own cars.

I wish I had some pictures, but didn't have the camera with me...it would be fun to have a picture of me in line for the women's room, with all the girls around me!

Posted by Mandy Sherman at 2:03 PM