During our most recent trip south to visit our son and his family, we made a “slight left turn” and dropped in on the Tennessee town of Greeneville, which we found has an important place in USA history.  That’s because President Andrew Johnson (17th president, 1865 - 1869) lived here…

Who was Andrew Johnson, you might ask?   Long story...with the majority of what follows found on Wikipedia.  He assumed the presidency as he was vice president at the time of the assassination of Abraham Lincoln on April 14, 1865.  Johnson was a Democrat who ran with Lincoln on the National Union ticket, coming to office as the Civil War concluded. He favored quick restoration of the seceded states to the Union without protection for the former slaves. This led to conflict with the Republican-dominated Congress, culminating in his impeachment by the House of Representatives in 1868. He was acquitted in the Senate by one vote.

Johnson was born into poverty in Raleigh, North Carolina, and he never attended school. He was apprenticed as a tailor and worked in several frontier towns before settling in Greeneville, Tennessee. He served as alderman and mayor there before being elected to the Tennessee House of Representatives in 1835. After brief service in the Tennessee Senate, Johnson was elected to the House of Representatives in 1843, where he served five two-year terms. He became governor of Tennessee for four years, and was elected by the legislature to the Senate in 1857. In his congressional service, he sought passage of the Homestead Bill, which was enacted soon after he left his Senate seat in 1862. Southern slave states seceded to form the Confederate States of America, including Tennessee, but Johnson remained firmly with the Union. He was the only sitting senator from a Confederate state who did not resign his seat upon learning of his state's secession. In 1862, Lincoln appointed him as Military Governor of Tennessee after most of it had been retaken. In 1864, Johnson was a logical choice as running mate for Lincoln, who wished to send a message of national unity in his re-election campaign; and became vice president after a victorious election in 1864.

After Lincoln’s assassination in 1865, then-President Johnson implemented his own form of Presidential Reconstruction, a series of proclamations directing the seceded states to hold conventions and elections to reform their civil governments. Southern states returned many of their old leaders and passed Black Codes to deprive the freedmen of many civil liberties, but Congressional Republicans refused to seat legislators from those states and advanced legislation to overrule the Southern actions. Johnson vetoed their bills, and Congressional Republicans overrode him, setting a pattern for the remainder of his presidency.  Johnson opposed the Fourteenth Amendment which gave citizenship to former slaves. This did not endear him to many folks.  In 1866, he went on an unprecedented national tour promoting his executive policies, seeking to break Republican opposition. As conflict grew between the branches of government, Congress passed the Tenure of Office Act restricting Johnson's ability to fire Cabinet officials. He persisted in trying to dismiss Secretary of War Edwin Stanton, but ended up being impeached by the House of Representatives and narrowly avoided conviction in the Senate. He didn’t win the 1868 Democratic presidential nomination and left office the following year.

Johnson returned to Tennessee after his presidency, and gained some vindication when he was elected to the Senate in 1875, making him the only former president to serve in the Senate. He died five months into his term. Johnson's strong opposition to federally-guaranteed rights for black Americans is widely criticized; he is regarded by many historians as one of the worst presidents in American history.  (Wonder where he fits in, compared to some of our more recent ones?)

As for Greeneville itself, it’s a lovely town.  We found the pretty little train station (naturally), still in use but not as a railroad station.  As for his residence “The Homestead”,  Johnson owned it for 24 years, and lived here both before and after his presidency. During the Civil War, soldiers occupied the property and left it in disrepair. The Johnsons renovated it when they returned from Washington, filling it with Victorian furnishings and political gifts. Three generations of the family then occupied the home, before placing it in the stewardship of the National Park Service. 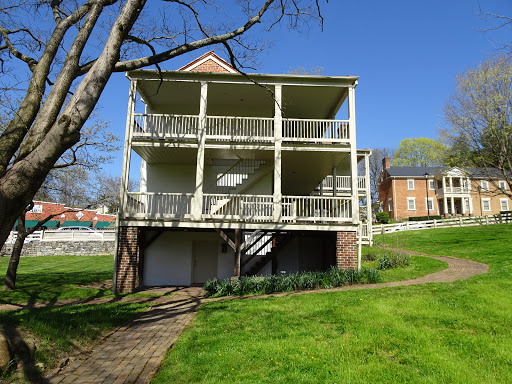 And a very pretty property it is – that back porch is simply spectacular!  It would be fun to go back for a tour when we have more time!

Posted by Mandy Sherman at 8:59 AM