An adventure at the hotel...

Afterward it was time to check in at my hotel, and then head for the Shipyards area, to do some exploring on foot.
Checking in at the hotel was an adventure…    I was initially identified as female and addressed as “Ms. Sherman,” but the overall experience was definitely a challenge.  They couldn’t find my reservation.  I had proof, in the form of a text message from the reservation office, and a printed copy of it, but they could not find it.   Needless to say, I was not "s happy camper."   But I tried to react more like a woman than a man, so I was polite in dealing with them.

I was preparing for them to say they could not give me a room…at which point I would've had to dredge up the standby line that I’ve only had to use once previously (and very successfully)  back in the late 1980’s.  What precipitated that "back in the day" was being told by the hotel manager that the conference hotel (it's name began with R but it’s not Red Roof Inn) was completely sold out and they could do nothing to help, despite my reservation and the fact that I was attending the conference.

There were other customers standing in line right behind me, as I asked the manager:   “If President XXX walked in to stay with you tonight, you’d find rooms for him and his entourage, right?”  Their answer back then (and presumably any quality establishment’s response now still would be – or maybe not, given the current political situation ) was “Of course we would, absolutely.”  To which I responded:  “Well, I can assure you he won't be arriving here tonight.  I’ll take one of those rooms.”
The manager's chin dropped to the floor.  And to my amazement, it actually worked…I was given a room.   There's never been a reason to try it again.

Back to the present:  after a 20-plus-minute wait, staff “found” my reservation…with apologies, but no reduction in rate.  I asked them to see what they could do and they said they’d let me know at checkout.  It was fun, in that every staffer in the vicinity by then knew me as “Ms. Sherman, the lady with the lost reservation.”   And I finally got the key to my room…to relax a bit before going out for dinner.

Enroute through the lobby on the way out to visit the Shipyards area (i.e. get dinner and sightseeing), I was still “Ms. Sherman.”  So nice to hear that, even if they happened to be aware of my true gender (which is at least possible, due to my driver's license and affinity card info!)   I stopped at the children’s museum in the area to check it out for our granddaughter, and get a brochure with info.  The receptionist (middle-aged female) interpreted me as female, and answered all my questions.  A nice place…hopefully one day we can return with our granddaughter.

When I got to the restaurant, their greeter (a 20something girl) told staff that they can seat “him” (wearing a skirt and top, of course) in that booth over there (the place was crowded).  That was the only notable instance of being clocked on the entire trip.  Were I truly female, I’d have been upset enough about being identified as male to have a little chat with management and then walk out the door.   The food and service were OK…not great, just OK.  After a quick dinner, I was headed out the door. 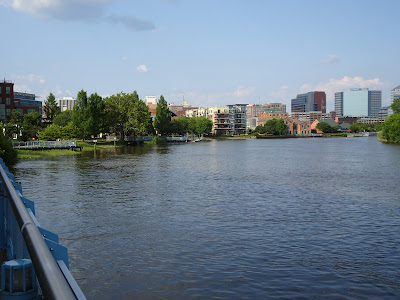 There is also a fun little boat ride available, on their imitation paddlewheel "steamboat", which gives tours of the river area: 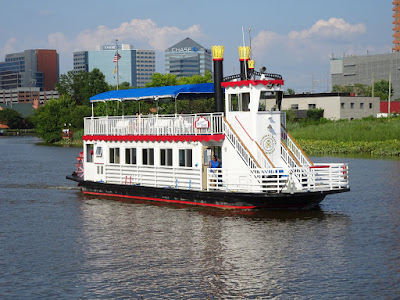 I didn’t have time to sail on it this trip, but it’s on the list for next time.

So I continued walking partway downtown on the Riverwalk along the Christina River,  a signature  natural feature in the Shipyards renovation.   Lots of folks were enjoying the walk in the warm weather, and folks playing mini golf were having fun.    Finally it was time to head back to the car...and return to the hotel for the night.   The Wilmington skyline is pretty, with the river in the foreground.    I decided to come back tomorrow morning to finish the walk.

Once back to the hotel, it was time to settle in for the night.  But I was still Ms. Sherman as I walked thru the lobby....

Posted by Mandy Sherman at 2:06 AM