First time out this year, Part 2.

Time to go home…I got up early, dressed in the outfit below, and was on the road by 8:30.    On the agenda today were visits to some Pennsylvania sights I have been wanting to see for a long time. 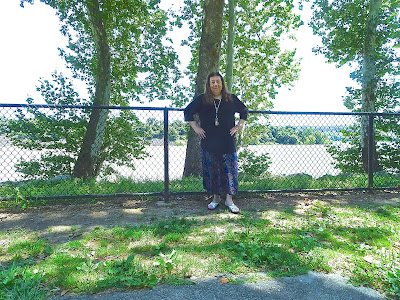 First stop on the way home was in a town by the name of Middletown, PA.  Its main claim to fame seems to be the Three Mile Island nuclear generating facility in the Susquehanna River.  Yes, the same facility which in March of 1979, experienced the largest nuclear power accident in the USA.  It was a near-meltdown calamity in which radiation was released, due to equipment malfunction and human error.  From this serene picture, it’s hard to believe that such a serious issue could have occurred  there. 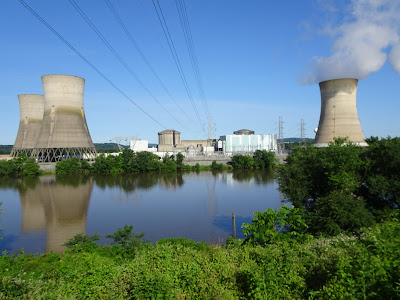 Next stop was River Trail Park and Pavilion, a stop on the trail along the Susquehanna River at Marietta, PA.  This picturesque setting (below) provided a great view of the “very high” water level of the fast-moving river, with flooding at the boat launching ramp (see picture).  For some odd reason, nobody was trying to launch their boat!   Had a nice discussion about my car with a male visitor riding his bicycle…because bikers were the only visitors at that time of day…several arrived by car as we were talking. 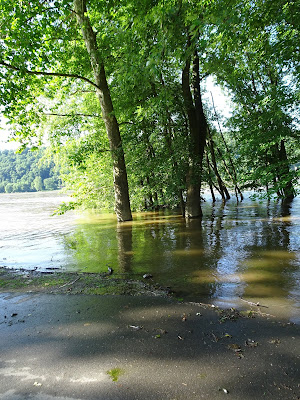 Then it was off to try to locate Shenk’s Ferry Wild Flower Preserve, about 30 miles south of Middletown.   When I eventually found my way to the entrance of the preserve (much slow driving on poorly paved country roads, which seem to have been the proper width to handle only small Fiats and Minis), I was greeted with a sign stating “Unpaved Road - No Winter Maintenance.”

Looking at the ruts and humps in the dirt road ahead of me, I could not only believe that statement, but amend it to say “No Summer Maintenance Either.”   It truly looked as if nothing had been done to it since the year my antique car was built…   Not having 4wd with lots of ground clearance, and with nonexistent cellphone coverage in case of getting stuck, I did a 180-degree turn and “got out of Dodge.”  Making the “Queen Mary” turn around on those narrow roads without dropping a tire in the ditch was fun…NOT.  Good thing for power steering – even 52-year-old power steering!

Next stop was the highlight of the day’s sightseeing…in part 3!