There hasn't been much activity on the gender front these past few weeks since my last post.  Mandy has basically stayed "in the suitcase" and I've bustled around the area in androgynous mode.  No skirts, but yes, there have been the typical "Miss-identifications" among strangers.

The most noteworthy activity was our visit to Tennessee to see our Son, D-I-L and their baby, now 2-1/2 years old and growing up fast.  We've been anticipating this visit for some time, and it finally came together.

The drive is about 12 - 13 hours (including a lunch break and a couple of rest stops) so we break it into two days, and do our usual sightseeing enroute.  Below are some of the noteworthy stops we made this trip.

First is the Hilltop House hotel, located (obviously) on the top of a hill overlooking Harpers Ferry, WV.  This famous hotel was built in 1888 by Thomas Lovett, a man of African-American descent who dreamed of managing a hotel overlooking the site of John Brown's historic act.  His hotel burned in 1912, was rebuilt, and burned again in 1917 or 1918.  Lovett and his wife persevered, and the hotel became host to such notables as Mark Twain, Alexander Graham Bell, and Bill Clinton.

It is also said to be haunted.   Episodes of paranormal activity have been noted by staff and visitors alike.   Some of the things noted have been: laughing, pots banging, furniture moving by itself, and sightings of soldiers...including a whole regiment of men, which makes its way up the road to the hotel.   Room 66 was one hot spot in particular:  haunted by the ghost of a small boy who perished in the 1912 fire, a portrait of the boy in that room was alleged to cry real tears.

I had been hearing about the Hilltop House back in the early 1900's, and had good intentions about going there for a night, to sample the hospitality.  But I kept postponing the visits.  Unfortunately in 2008 the hotel was deemed unsafe for continued occupancy, and it was closed.   There have been periodic attempts to restore and re-open it, and in the interim, a change in ownership.  But so far, nothing has come to fruition, for whatever reason. (The jury is still out on a March 2018 attempt.)

Naturally, we stopped by for a few pictures, in case nothing ever happens and it eventually succumbs to the forces of abandonment and nature... 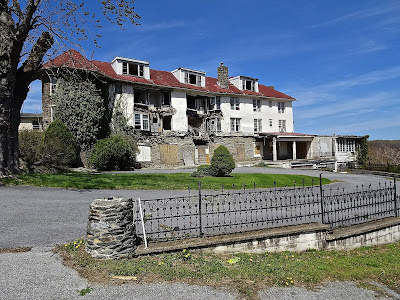 Above is a front view of the hotel, showing the crumbled front porch and front wall.  This is very sad to see.   If you are interested in more pictures, simply go to You-Tube, search for Hilltop House Harpers Ferry and find lots of them, including some interior pictures and videos posted by urban explorers.  (Not us, we don't do that.  No way we'd want to, with all the paranormal activity.)   There are also some really amazing pictures taken from drones. 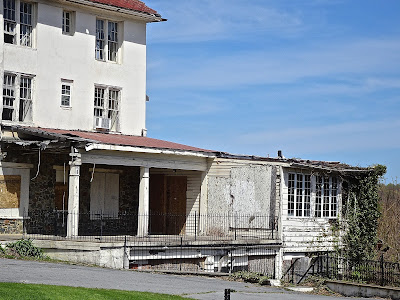 And another pic, showing the deterioration of the dining room addition.   One can only hope that restoration of the 80+ rooms can begin, and bring this historic place back into daily usage. 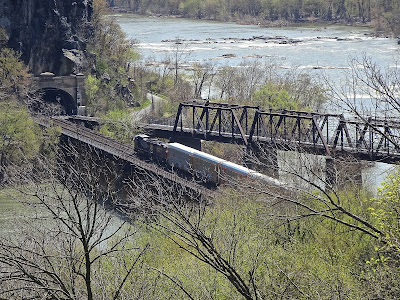 This is the view from the overlook in front of the hotel.  The railroad tracks with the train is the CSX Transportation main line to Pittsburgh, which my wife and I have traveled many times.  (And each time, I think about the missed opportunity to stay at the Hilltop House...)   Under the bridges and making a left turn, is the Potomac River.   Upstream to the right, is the Shenandoah River, which joins the Potomac at Harpers Ferry.

Another interesting factoid is that Harpers Ferry is the easternmost town in West Virginia...

In last year's post about my trip to the East Broad Top narrow gauge railroad, the town "Burnt Cabins, PA" was discussed.  On this trip, I noticed a sign for "Burnt Factory" in Virginia.  So we took a detour, and found some nice homes and a pretty church.  Plus a lot of trees. But no burnt factory. 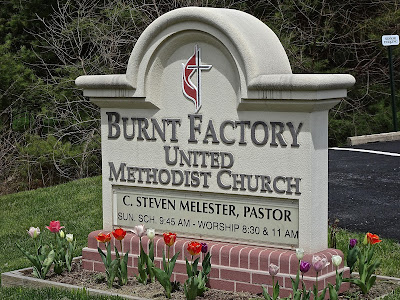 A brief internet search resulted in being unable to confirm the origin of the name, but like Burnt Cabins, it presumably was named after some sort of local factory being burned at some point in history, maybe the Civil War?

Onward to Bristol...   This is a very pretty town, which straddles the VA/TN state line.   It once depended on passenger trains for its transportation needs, as evidenced by this majestic station.  It has been restored and is in use - but not for train passengers.  Trains don't stop here anymore, nor do passenger trains cover these well-maintained tracks - only Norfolk Southern freight trains.

This depot (built in 1902 at a cost of $79,063) is the fourth to be built on land donated to the VA & TN Railroad by Rev. James King in 1848.   Because it was built on filled land, concrete support columns had to be constructed to bedrock, 20 ft below.  Its main feature was the two story tower, but in the beginning, there were a newsstand, lunch counter, smoking room and men's toilet.  The second floor was the railroad office.   The single story part was the ticket counter and waiting room, divided into separate areas for men and women.  It has been restored and is now office space.

N&W discontinued steam engines in the 1950's, and with the coming of Amtrak, passenger service was eliminated.  But Bristol continues to be a division and crew change point, with about a dozen freight trains a day through town. 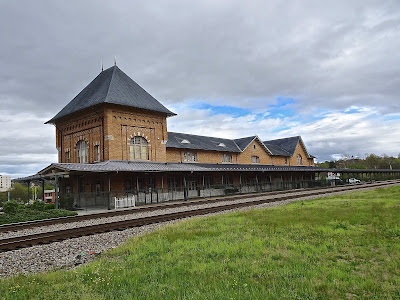 Substantially all of Bristol's current tourism results from traffic on nearby I-81, the nearest north-south major artery.   Numerous motels at the interchanges provide plenty of rooms for overnight guests. 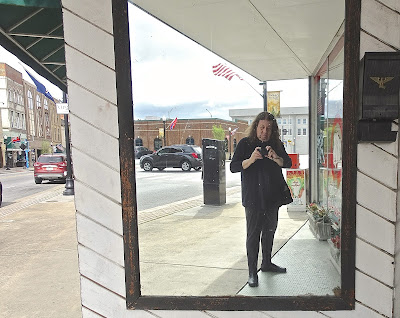 This picture is a grab shot to show how I was dressed enroute, and for much of the trip.  No skirts :-(   As an aside, I was standing in Virginia, and the other side of the street was in Tennessee.  Just a crosswalk away... 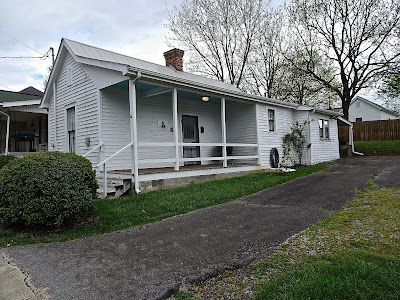 Speaking of Tennessee, does anyone remember the US Country and Western singer Tennessee Ernie Ford?  If you do, then you might enjoy seeing the house (above) where he was born, just a mile or so from the train station in Bristol, TN.  Of course, the place was remodeled after a fire years ago, so it's not exactly "as it was back in the day."  But it still is a "piece of history." 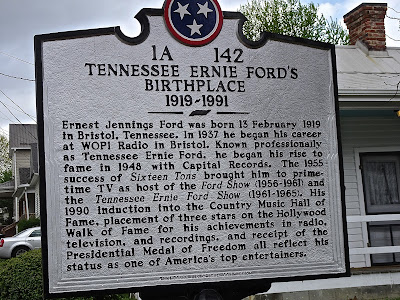 And above is a bit of info on the singer...

Posted by Mandy Sherman at 2:45 PM