I forgot to mention in the first travelogue, that the morning we left to go to visit the kids, I put on my necklace and bracelet.  That didn't last long...I was told to leave them at home.   Not wanting to start our trip with an argument I probably wouldn't win anyway, they stayed home.   A disappointing turn of events, to be sure.  But it wasn't the end of the world!   Stirrup pants, capris, flats and women's tops (all part of my everyday wardrobe) were packed, and they couldn't be left behind!

While still in Bristol, we drove past the restored Paramount Theater.  We didn't have time to see if tours were available,  but it certainly looks impressive... 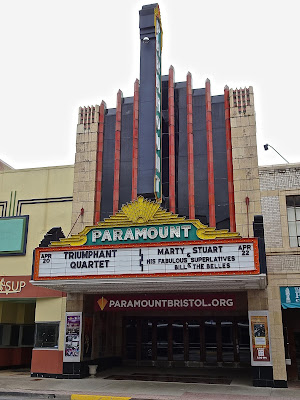 It reportedly opened on February 20, 1931,  and its 1400 seats functioned as a movie house and vaudeville stage with organ, for more than 50 years.  A bunch of seats were removed in the 1950's remodeling, to accommodate Cinemascope and stereo sound.  The original organ was dismantled and removed, but later replaced.  In the early 1980's, the Paramount was closed, and slated to be demolished to make way for 36 parking places.   Bristolians came to its rescue and the building's owner donated it to Theatre Bristol, which agreed to establish the Paramount Foundation.

After a final meeting in June of 1987 to evaluate the restoration/demolishment of the building, it was decided to proceed regardless of the hardships involved.    And it has been a very successful addition to the local cultural scene.

I couldn't resist getting a picture of this fine fellow below, a first-class piece of street art near the train station in Downtown Bristol. 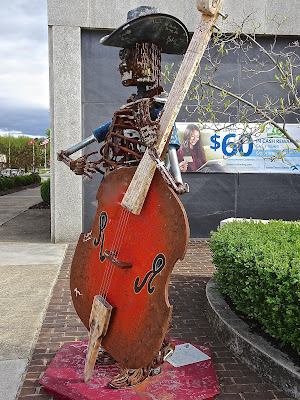 The Cameo Theatre (below) is another Art Deco gem in Bristol, a relic from the past, but unlike the Paramount (above), it has apparently not yet been massively restored, and now sees only occasional use for events.  Time will tell if it transforms itself into another asset to the arts in Bristol. 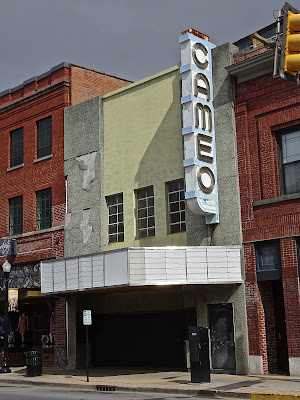 Below is the Grand Guitar,  the back of which is visible alongside I-81.  If you've passed that way, you may have noticed it, and wondered what it is.  We found a great front view from US-11... 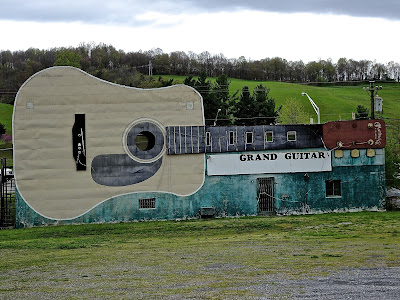 Yes, as you might inagine, there is a story about this building.  According to his family, Joe Morrell, who was a manufacturer of dulcimers, ran a record shop, and performed under the stage name of Herbie Hootenauger, had dreamed of building a shop shaped like a giant guitar (so it didn't look like every other building in town.)  And in May off 1983, he accomplished that goal.

Inside the building was a gift shop, a recording studio, an AM radio station (country music, of course)  and his personal collection of hundreds of musical instruments, including one shaped like a pig, and another made from a dead armadillo.

National Geographic featured the shop in 1985, and in 2014 it was added to the National
Register of Historic Places.  But by then, its owner (Morrell) had passed away and the building had been sold to a developer who promised to restore it.  Despite that promise, it remained abandoned for years.  (Still is.)

If this shop could play a country music song today, it definitely would be a sad one.

While in TN visiting our son and family, we went as a group to Chattanooga's wonderful tourist destination called Rock City.   What a place!  Trails all through and around rocks, plants and nature on the side of Lookout Mountain, which was the site of the "Battle above the clouds" back in the Civil War. 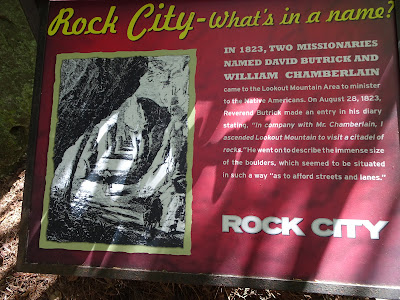 Following is a picture of yours truly in one of the rest areas provided, because of the many trails to walk... 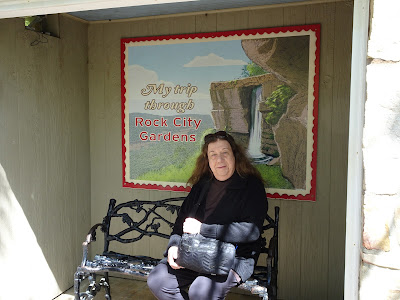 One of the attractions is a waterfall right on the edge of the mountain.  And the views were both panoramic as well as spectacular!   You can see seven states from the nearby overlook on a clear day! 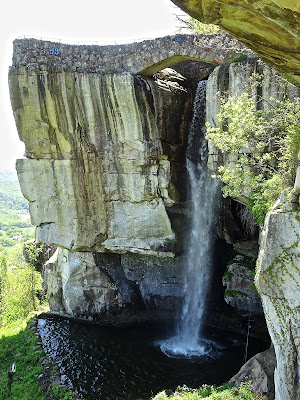 D-I-L's father has a boat, and following is a grab shot of me on a boat outing while we were visiting.  That sure was fun!   And nobody even gave my sandals or jean capris a second thought...   Since they're part of my everyday wardrobe, my wife was fine with them.  Even though it was nearly 80 degrees on shore, it was cool out on the water.  So my wife and I wore our matching unisex heavy sweaters...that we bought years ago, at a tourist site in Utah. 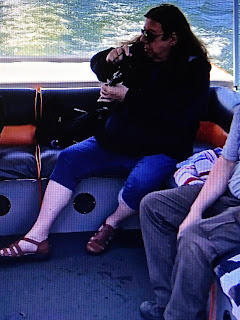 All too soon it was time to return home...the kids caravanned back with us, stayed almost a week, and then they drove back to TN.  Best non-Mandy vacation in a long time!