By that time, I was getting hungry, and ready for dinner.   And,  I chose to avoid the crowds elsewhere by eating in the "dining car."  It worked, and I beat the rush.  Folks were too busy with the fun things in the area and hadn't stopped to eat yet.

From the window pattern on the side of the restaurant, it appeared to be a former coach, converted to food service.  But whatever it was "back in the day," it looked nice inside.    And the food was good. 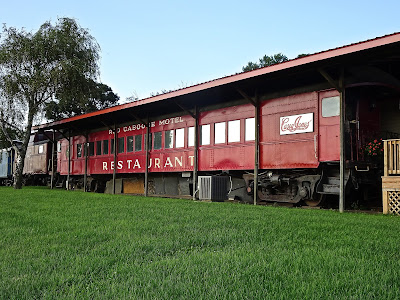 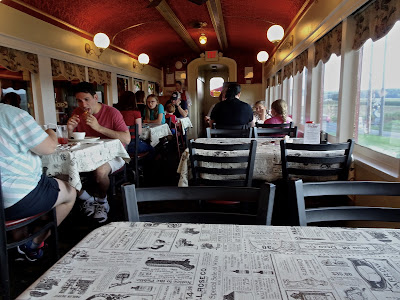 Obviously, I managed to get there before it got too busy.

Walking around the venue after my meal, I spotted this unusual vehicle.  It looked more like a kiddie toy than a real car, but it had a right-hand drive and looked capable of on-road use, so it must be European.  And it has the VW emblem on it.  Could it be the new version of the venerable old Microbus that VW is allegedly bringing out?  I looked up on the internet...but it just seemed too small (inside and out) to be a real car.   Those wheels and tires are simply tiny. 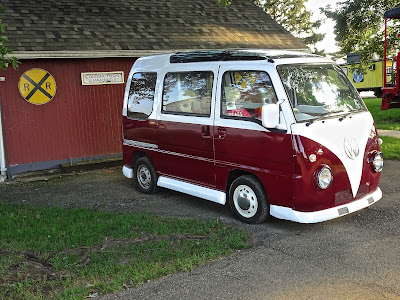 So I'll ask the question of the day:  "Does anyone know what it really is?"

What finer way to cap a long day, than with a pretty sunset?   Visible right from my room was this beauty: 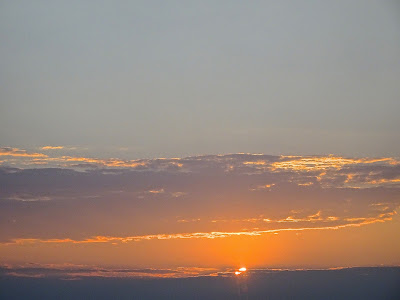 The second (and  final) day of my excursion dawned sunny and clear (after some overnight showers), and I decided to visit the Railroad Museum of Pennsylvania, a short drive (three minutes) away.  After checking out of the motel the next morning, and before heading home,  I dropped in.  Having been there before, I concentrated my visit on the outside display areas, which had been closed on the previous visit. 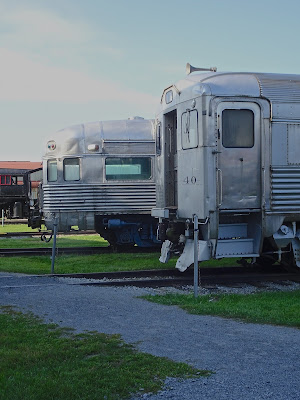 Seen above are a former Lehigh Valley rail diesel car - a self-contained passenger car, complete with traction motors and a diesel engine on board, and cab controls in the vestibules, so it can run in either direction without a separate engine - and a former Reading Railroad observation car which ran on their streamliner "The Crusader."   There were many more historic pieces in the yard, including a former Amtrak AEM-7 electric locomotive, recently retired - the most modern exhibit. 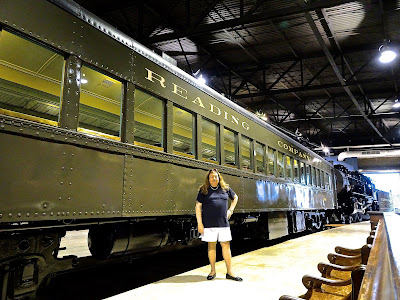 "Take a ride on the Reading..."     That was a slogan the railroad used in its ads, "back in the day."  But automobiles and airlines took became darlings of the travel industry, and the Reading (along with other historic passenger railroad names) became part of US Transportation History.    At least we still have Amtrak, and I hope it continues to operate...for a long time to come.

With the museum's location (just across the street from the Strasburg Railroad), it was easy to walk over there and do some sightseeing as the first train of the day was assembled and prepared for departure. 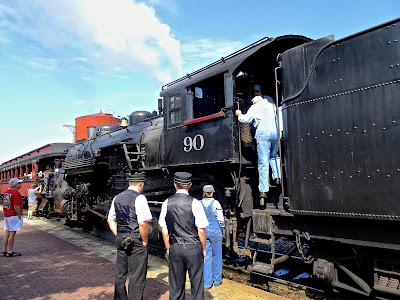 From there, I pointed the front of the car toward home.   No cornfield changing needed this time!
And yes, as you can tell, I had a wonderful excursion!

Even without the added attraction of the Tri-motor, the Strasburg area is great for families...if you ever get a chance to visit, be sure to take the whole gang.  There is plenty to do in the area...