This one was  to visit our son and family, plus meet some friends for sightseeing.  The trip south was uneventful.   Well except for a couple things...

With my wife present, I traveled in women's shorts and a short sleeve tunic, flats (no pantyhose), my necklace, and purse.    (As well as, the ever present pink nails and long hair - of course.)

At a gas/convenience stop in Maryland, my wife went in to use the potty while I filled the car's gas tank.  She returned and said nothing about anything being amiss.  So I moved the car to a parking place and went in to use the restroom.   Both men's and women's rooms were in the same hallway, with the men's room further down.   Four fat, bearded and mustachioed "stereotypical bubbas" were standing there by the women's room door, waiting in line for men's room, which was being cleaned.

My need to use the restroom was very, very urgent.  Strangely enough, with my purse over my shoulder, I didn't give it a second thought...   Four pairs of eyes were watching me as I tapped on the women's room door.  Hearing no answer, I entered.  (Luckily it was a one-holer.)   I used the facilities as a woman, and came out in an appropriate length of time, to find the "bubbas" still waiting in line.   I said to them..."Have a good day, guys."  Their response:  "You too, Ma'am."

Though I don't do something that brazen very often (and specifically avoid it as much as possible), it was rather uneventful...considering that so many things could have gone wrong.   (Like a fight with the "bubbas", or soaking wet shorts...)

Back at the car:  "I thought you'd take a lot longer than that, with the line for the men's room.  Do we need to stop at the next place with a restroom?"    "No, I used the women's room."  "Oh.  Well, at least you look the part."  Then, the subject was changed.

We stopped for lunch enroute - at a Cracker Barrel.  There, we were addressed as "ladies" as we were escorted to seats.  And the same situation existed all through dinner...   Hmmmmm -  I didn't think I looked all that feminine.   Guess I was wrong!

Among friends, who already know my gender, there is no confusion.  During our trip, I did hear a comment from one male friend.  He commented..."I can tell that you don't work on your antique car yourself."  I already knew the reason he would offer...so I replied "And why might that be?"   His response: "Those pretty nails wouldn't survive if you did."  From there, I led the subject off the nails path and into a discussion of my mechanic, and it never came up again.  (Incidentally, this guy was the same one who joked "Hey, nice skirt" when I had my sweater tied around my waist last year.  At least he doesn't pursue it further.)

My typical traveling outfit,...this was taken during a historic house tour on one of our sightseeing days: 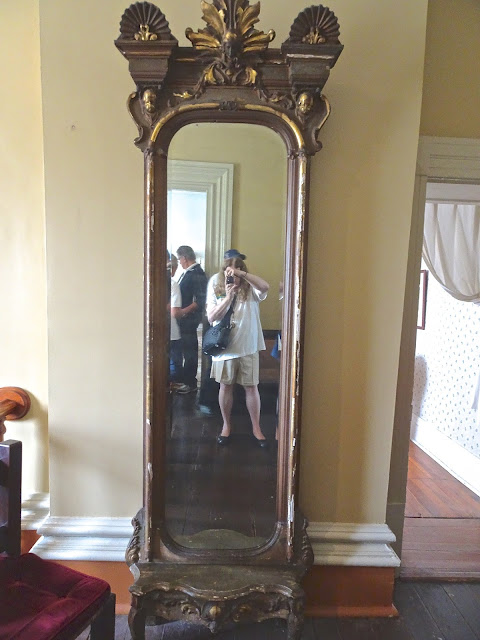 Guess I look a bit more feminine than I thought....

Posted by Mandy Sherman at 4:00 AM