Arriving in LA only a little past the 5:35 AM schedule, I decided that I would wait till 9AM to pick up the rental car at the station.  Thus, I checked into the first class lounge at the train station. (No issues whatsoever.)   I hate traffic to begin with, and starting out for Santa Monica at 7 or 7:30 would almost certainly mean an extra long trip, in rush hour traffic.

There was no issue at the lounge, nor at the car rental counter.  My feminine outfit didn't matter - renting a car wearing a skirt, blouse, makeup and women’s jewelry was not an issue.  Obviously they had the info on my driver’s license, which shows the big “M.”   The female agent simply omitted any gender specific terms when talking to me.   And that was OK – at least I didn’t hear “Sir” – which could have confused adjacent customers.   Once I had the keys and the car, it still took me about 45 minutes to drive to Santa Monica.   And it’s not very far.

When I arrived at the motel, my room wasn’t ready yet (it never is…LOL) and they suggested coming back in a couple hours.  They were very friendly and sociable, and the gentleman I spoke with on the phone referred to me in the feminine gender.  It’s a good thing he didn’t remember referring to me as “Sir” when I made the reservation with him over the phone!

So off I went, to the Museum of Flying at the Santa Monica Airport.   It’s a great little facility, but what immediately catches your eye is the  “stuffed and mounted” DC-3, which dominates their front yard.  Can’t miss it!   And after all these years, I finally found out what the DC stands for in “DC-3.   The planes were made at the Douglas factory here in Santa Monica, and the C stands for Commercial..   Hence:  Douglas Commercial – 3.   (Yes, Virginia, there was a DC-1 model and DC-2, as well, in addition to 4, 5, 6  and so on.) 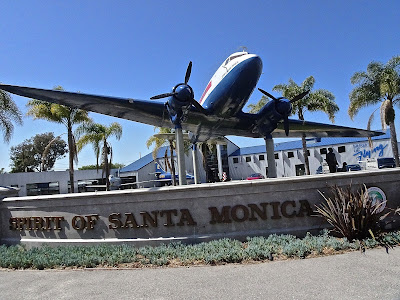 They had many other stuffed and mounted planes, artifacts and displays  - mostly inside.  When I finished there, it was back to the motel to check in.   And my room was ready.  And I was once again referred to in feminine terms.   I’m really beginning to like this!

After settling in, I took a walk to the beach (a block and a half from the motel) and followed the beachfront walk for a mile or more, hiking all the way to Venice Beach.   Weather was beautiful (sunny and low 70’s, with a gentle on-shore breeze), and though the beach was not crowded, there was still enough “cheesecake and beefcake” on the trail (skateboarding, bicycling and hiking) to please anyone.

And the fact that I was out and about, in the presence of kids and adults alike, with no issues whatsoever (yes, I was wearing sunglasses so I could watch when I felt like it) made this another wonderful experience.  It could become habit-forming.

I  expected to have dinner at a certain beachfront restaurant in Venice Beach, but there was a loud band out front, playing contemporary rock music, and I “couldn’t even hear myself think.”  But judging from the number of teens and twenty-somethings there, they enjoyed, and that’s what counts.  I walked on by. 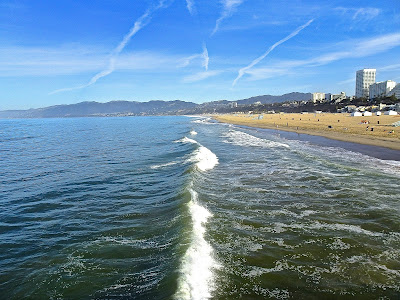 So,, on the hike back to the motel, I stopped for early dinner at a seafood restaurant.  No gender-specific greetings there  : -(   I enjoy being out in public en femme, and going about my routine business.  But I’m still not comfortable being in a bar environment as a woman.   Alcohol,  loudmouthed people and TG's sometimes don’t mix well.  But the restaurant was family-oriented, and – surprise – probably 75 percent of the women were in skirts.  Plus, half of the girls in skirts were in some kind of heels.   No heels for me on this trip.  The amount of walking I’ve been doing (and luggage space or lack thereof) precluded bringing them.

Then I hiked back to the motel, "done in" from all the hiking.

Starting  out very early (6AM to miss traffic), I checked out a decoration I’d noticed on the front of a CVS Pharmacy in Venice Beach as I drove back to the motel from the Museum of Flying.   It was unique enough that every tourist walking by was grabbing their iPhone or camera.   Don’t you agree? 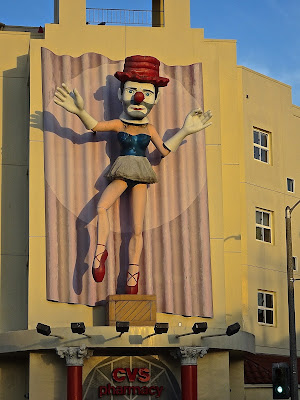 After finishing up in Venice Beach, I headed for Santa Monica Pier and the “End of Route 66” sign.  Everyone had advised against parking on the pier as it was so expensive.  But that’s where the signs led me, and in reality, they seemed reasonable since they charged by the hour, not by the day.   My visit only cost $6, not too bad.   I’ve paid much more in big cities. 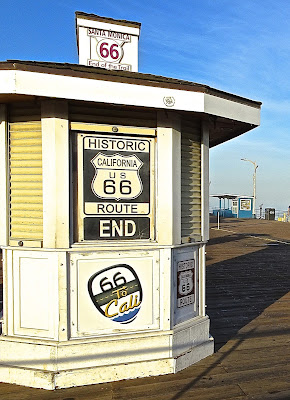 Remember the Eagles and their song “Hotel California?”  There is a hotel by that name - very close to the pier.  I don’t have any "inside info" about it, or any "inside knowledge" about a connection to the one in the song.   But it’s very nice, though eclectic, and has a surfing theme, as you can see from the pic.   I would have considered staying there except for the price (twice what I paid per night.) 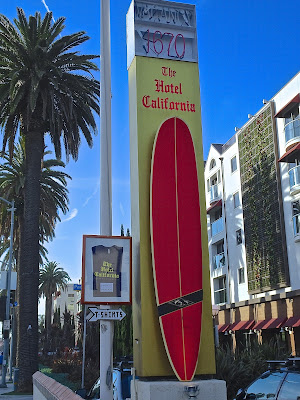 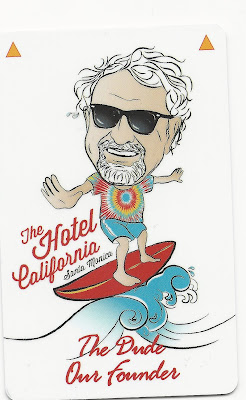 This is a scan of the front of their room key...given to me by the desk clerk as a souvenir.

My view of the song (which I like) is that it’s more about the CA culture of the  60’s and 70's. Like extravagance, drugs, party till you die type thing.   (But your view might be different.)  Hmmm…they did party pretty late in Santa Monica the first night I was there.   The second night was more subdued…    While visiting the pier, I walked along the bluff, near the edge of downtown.   Very pretty view of the pier, the surf and the coastline.

When   I finished at the Pier, I decided to drive north on the PCH.  (CA route 1, the Pacific Coast Highway.)  My wife and I drove the section from San Francisco to Santa Barbara a number of years ago, so this would partially fill in the gap.   My objective was the Missile Park at the Naval Air Station at Point Mugu in Ventura County.    It is to small US missiles (think Regulus, Poseidon and smaller) what the Museum of Flying was to aviation in general.   However, everything is outside, is identified, and there is no attendant, so it’s “walk around and look.”   But still very nice – it’s a worthwhile destination. 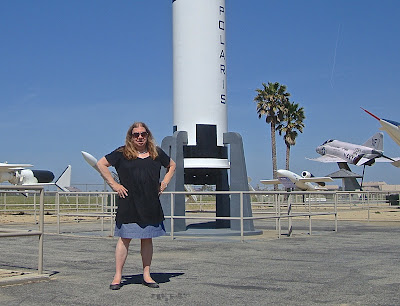 In my pictures from this trip, you'll notice that I appear to have only 3 skirt outfits with me.   That's basically correct.  I brought a fourth, but didn't wear it on account of laundry issues when returning home.   That will be corrected, along with several other things I'll talk about in my final segment of this travelog.


On the way back, I stopped at several beaches and overlooks.    As expected, the traffic was just awful.   When the two-lane road became four lane as I got closer to Santa Monica, I pulled into the right lane (I only go the speed limit and want folks to be able to pass me.)

A young guy – probably in his daddy’s Ferrari (or some other noisy exotic sports car) - crept up beside me.  The driver checked me out, and hit the gas hard, squealing his tires and roaring ahead, then slowing down till I caught up again.  I was wearing sunglasses so he couldn’t tell I was looking at him as he looked my way, then roared ahead again, and this time kept going.   Was he flirting?   I suspect so.   We both knew there’s no way a Nissan Sentra could outrun a Ferrari – although in this case, it would have been a true “drag race...” – pun intended.

When I eventually got back to the motel and happily was able to park the car for the night (I hate traffic), I decided to walk back to Venice Beach to get takeout at one of the restaurants.    On the way back I noticed something new…a “barcycle.”  No, not a bicycle – this was a wagon with a bar in the center, with a driver/barkeeper to drive.  And pedals at each of the seats around the bar. to power it with alcohol! 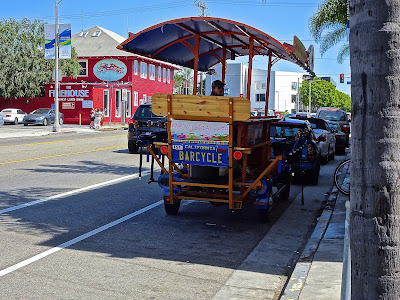 I didn’t do much investigation, but it seems you can charter it for events.   And with the patrons providing the motive power, it doesn’t use any non-renewable energy!  Very curious….   Then it was back to the motel to pack for an early departure back to the train station….heading for my next destination.

Gee, I hate to see that this extravaganza is winding down.   That closet door I kicked off its hinges this week was last seen floating away in the Pacific…