On the road again….time for a little excursion.

With the possibility already mentioned that the new administration in DC may try to eliminate funding for Amtrak’s intercity trains, I decided to get out there and ride the rails, before it’s no longer possible.

I charted out a “dream vacation” covering many of the western routes, planned some interesting layovers. And made my reservations…solo.  (My wife was invited, and she likes trains, but not this much.  So she opted out.)   Before you ask - yes, retirement makes things like this achievable.

As I get summaries of each segment written, I’ll publish them…let's start with this one!

Departure day finally arrived.  I headed for the train station at the airport in Baltimore, to catch a commuter train to Union Station in DC.

For this part of the trip, I had to travel in "less feminine mode"…as the trains would be ones my wife uses to get to her sister’s place for their annual visit.   My attire was stirrup pants, pantyhose, flats, turtleneck tunic top, necklace, and purse.   And my nails were freshly done (in a light pink color).

On the commuter train, nobody - from the ticket office to the train - used any gender-specific forms of address for me.  In Union Station however,  I was universally addressed as female,  at least until I got on the Amtrak train…when as if by magic, the greetings reverted to “male.”   Both the train crew and sleeper/diner attendants.  I didn’t recognize the folks, but apparently they knew my real gender.   C’est la vie.

By the way:  in case nobody has seen them, at Union Station a shopkeeper is apparently making some money from selling “Hillary Clinton bobbleheads.”  I didn’t buy one (though probably it would be a decent investment as a collectible), but almost went in to ask why they weren’t selling “Donald Trump bobbleheads” too.  Maybe they were Hillary supporters...   There were a lot of customers in the store, and time didn’t permit waiting…

My  train departed on time for Chicago.  But after the last regular stop in Western Maryland, delays began.  Five minutes here, five minutes there, waiting for trains going in the other direction.  After “dinner in the diner,” the car attendant turned down my bed, and I hit the sack.   Though with all the stops, I didn’t sleep much.  In the railroad industry, and old adage says “late trains get later. “  And it sure did.   As far as I was concerned – the delay was no matter.  All it would do for me is shorten an uncomfortably long layover.

Remember, I was dressed as I was yesterday, since I was still on "my wife's" train.  Once off the inbound train in Chicago,  folks I ran into at a restaurant and again at the lounge at Chicago Union Station, all interpreted me as female, despite my not wearing a skirt.  In fact, few women were wearing skirts. which surprised me.   With the temperature at 75 degrees at 11 AM, I thought skirts would be popular.  My mistake!


But I put the time in the Windy City (yes - it lived up to its name) to good use…by doing some interesting sightseeing right after arrival, and getting a few pictures. 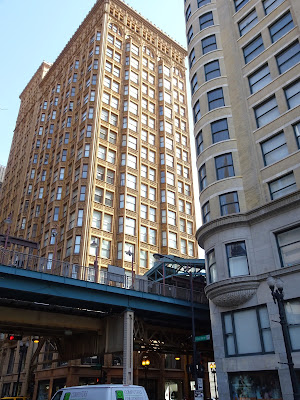 Remember Kolchak - the Night Stalker - from an ancient horror series about paranormal activity on the Telly back in the 70's?   (Be careful...if you do, you're dating yourself!)  In the above picture, I finally got a good look at what I seem to recall was Darren McGaven's office!  (The one at track level on the Elevated - pictured above.  He could see into the trains and riders could see into his office.) 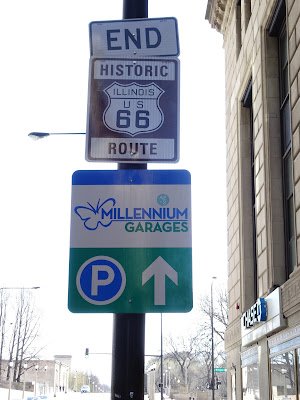 Above is on the south side of East Jackson, down by the intersection with South Michigan Ave.  It marks the end of Eastbound Route 66. 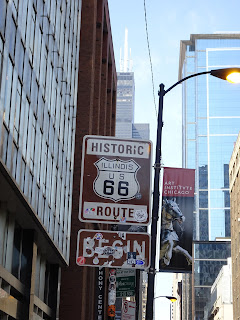 The above sign on the South side of Adams Street beckons the way West on Route 66!   Note the Sears Tower (now Willis Tower) peeking up over the top of the sign!

Once back in the station, waiting in the lounge for departure to New Orleans,  I found out that there had been some demonstrations near the Trump Tower that day- those supporting Trump clashing with those who don't support him.   That's all I would have needed - to accidentally step into the middle of something like that.  Fortunately I don't know where it is, nor do I care...but I certainly will be careful in the future!

At train time, I used the services of a redcap again, which saved walking out to the train.  Both my bags and I got a lift, along with several other passengers and their belongings.  I guess I'm not the only one who doesn't travel light.  And I was correctly addressed by the folks present.

My train left the station, and then stopped dead in its tracks.  A lift bridge in front of it was stuck, and they couldn't get a good estimate of how long it might be until it would be fixed.   So they disconnected the diesel engines, drove them around the train and put them on the other end, and devised an alternate route to get us out of the station and headed south.  (By the time we arrived in New Orleans, we were almost 2 hours late. )

On this train, the young car attendant initially interpreted me as a guy, using the dreaded "S" word.   But as several passengers addressed me as a lady, his tune changed.  And after returning from the diner (where the staff addressed me as a guy), he had started to address me more appropriately.   Not sure what made him decide to do that, but whatever the motivation, he did the right thing.  Even though I wasn't in a skirt.   And it remained that way for the rest of the trip.   (Which - along with getting me off the train first) ultimately earned him a tip...

Sleeping was tough that night, due to the rough ride.  Tracks belong to the freight railroad (in this case Canadian National), and though repairs have been forthcoming, it's a lot of track to fix.  It appears they've done quite a bit, but there's more to be done, that's for sure.

I've never been to Jackson in Mississippi before, and probably won't be again.  But my new friend the car attendant got a pic of me on the platform there.   It felt as though it was well over 80 degrees, and upon returning to my room,  I shed the long pants for shorts, and the turtleneck for a tunic blouse. 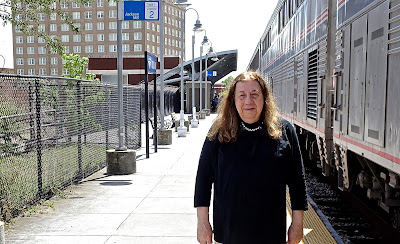 By the time the train arrived in New Orleans, it was still warm, but had clouded over, and tropical late afternoon storms moved through.  It was still raining as we skirted Lake Pontchartrain, and it had been a long night and day.  The cabbie, who identified me as "sir" got me right to the hotel, where the  desk clerk promptly used appropriate female greetings.  As did the bellman.


Once in my room,  the skirts came out and would be my attire until Chicago on the trip home.  For the present, shorts/pants were relegated to my suitcase.   A fabulous beginning to a wonderful trip.

And now the fun begins...stay tuned.

Posted by Mandy Sherman at 4:31 AM