As I mentioned in my earlier post about the "Hampton Roads", it was built at the Pusey and Jones shipyard in Wilmington, DE and delivered to the Chesapeake Ferry Company in July of 1925.

From Wikipedia:  "Pusey and Jones Corporation was a major shipbuilder and industrial-equipment manufacturer from 1848 to 1959.   Shipbuilding was the primary focus from 1853 until the end of World War II, when the company converted the shipyard to production of machinery for paper manufacturing. The yard built more than 500 ships, from large cargo vessels to small warships and yachts, including "Volunteer" - the winner of the 1887 America's Cup race."

Wikipedia also adds that on Liberty Fleet Day — September 27, 1941 — the yard launched one of the first US Liberty Ships, SS Adabelle Lykes.   After World War II, Pusey and Jones converted the shipyard's facilities to manufacture papermaking machinery.  The company closed in 1959.

Back in 2007 (April 22 to be exact) the Baltimore Sun ran an article by Chris Guy about the Hampton Roads.  It reads (in part):  "For nearly 40 years, beach-bound Marylanders have sped past the old ferry that sits, squat and square, ever-changing yet seemingly indestructible, at the western end of the Choptank River bridge.

The Hampton Roads' nine-lives kind of history has been limited only by the whimsy, vision and money of a procession of entrepreneurs. Among its incarnations: an upscale restaurant with white tablecloths, some lesser eateries, two or three different bars. There were a couple of antiques businesses -- including one set off by a red-white-and-blue paint job to mark the 1976 Bicentennial -- and an indoor flea market.

Throughout the changes, the ferry remained a part of U.S. 50 lore, a fixture in stark contrast to flat farm fields, a halfway-to-the-beach milestone more distinctive than anything between the Bay Bridge and the Ocean City skyline. It even achieved a bit of pop culture status in 2002, when the Maryland Transportation Authority made it Site No. 7 in the Bay Game, the coloring books that bridge toll collectors hand out to keep kids occupied on the way to the beach."

It's an excellent article, by the way.  Look it up in your browser if you're into things nautical...

There were many fabulous watercraft at the marina, from big to small.  But the name of one caught my eye on the way out: 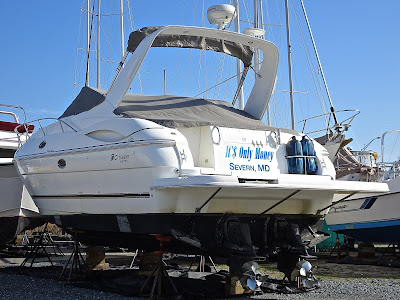 In case the print is too small and you can't read the boat's name on your screen, I'll pass it along.   "It's Only Money."  How appropriate!