You can't keep girls from shopping...

...even if some of it was mail order.

My new flats arrived by UPS, and they fit fine.  They are a croco-finish, with snip toes, and they're comfortable.  Even my wife likes them...on me, of course.  They're too big for her.   And it's nice that she occasionally tells me when she wants me to wear them...

That's a new skirt in the picture, but flash made the color too bright and red. It looks like "lipstick red" but in reality, it's not.  More about it in the following section. 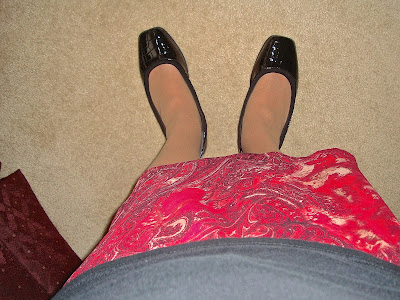 It had been a while since I visited a thrift store...so I stopped in for a few minutes.  Needless to say, a little voice spoke to me as I looked through the rack of skirts:  "Buy me, buy me!   Take me home with you!"  And this skirt jumped out of the rack, right into my arms.  I tried it on, and it fit!

It's a polyester skirt, so it won't wrinkle, and it's lined so it's not see-through.  It could almost be a sister to the paisley skirt I like so much.  And it will work well for cornfield changes.   Looks like I should get a lot of use out of this one, too!   This, its paisley sister, and a denim shorter skirt, with about 5 blouses, should be enough for a week on the road.

Color is not like the photo above...in that one, the red is too brilliant.  No, it's red like in the pix below.  Almost a wine color...  And I love it! 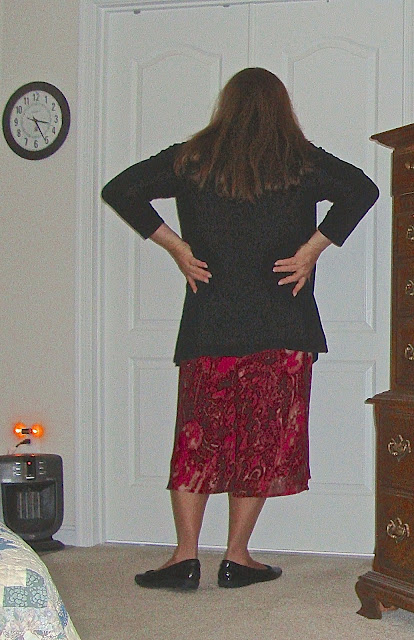 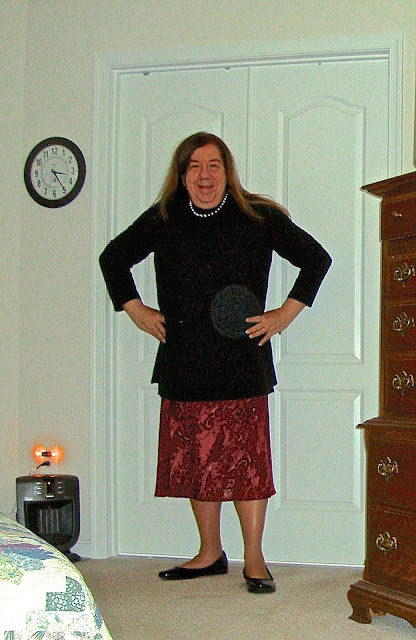 Later, I was paying my bill at the beauty salon...and one of the stylists noticed my nails, commenting how pretty they are but asking about why they're shorter than usual.  (The nail tech had made them all the same length as one which had issues and had to be shortened.)  She thought I should grow them out again, and my stylist agreed, though she put her hand next to mine and hers were even shorter.   "It's tough for a stylist to have long nails.  But you deal so well with them, you should keep them long."  And we all got a chuckle.

If you recall, earlier this year I discovered that a guy working in an auto parts store here on the Delmarva was working in a skirt and flats.   Then he disappeared for a while.   Needing some oil for the old car, I dropped in the other day.   And, SURPRISE, the guy in a skirt is back.  I saw him from afar.  Now I just have to be there when he is, so I can ask him for some help finding something....

Mandy
Posted by Mandy Sherman at 11:56 AM