Had a fabulous time at the Queen Mary, but all too soon,  it was “The Party’s Over!”

My last morning in Long Beach dawned cloudy and cool (60’s.)   After having spent the entire previous day and the day before that in skirts it just felt right to do it again.   And it showed me that I’d really enjoy doing that each and every day!

In retrospect, my reception by staff at the Queen Mary during the visit was generally “good.”  There were a few “Ma’am’s” or “Miss’s” but predominantly, there were no gender markers at all.   That’s fairly common back east (maybe out west, too?), and fine with me.  Nobody seemed to care how I was dressed, including the other hotel guests.

Notable was my reception the first day (with me in androgynous mode), when I first dropped in at the radio room on board.  Two elderly docents were there, and they fawned all over me once they found out (by asking) if I was alone.  Then they seated me, and took my picture at the radio set (with my own camera), a nice gesture: 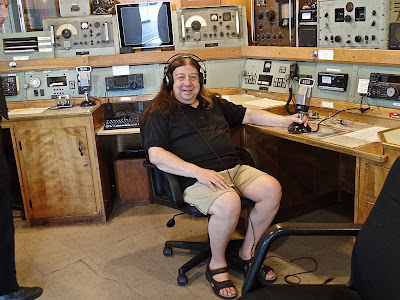 There was only one instance of “Sir – Oh, excuse me - Ma’am” my entire two week trip.  That one blooper was made on the second day at the QM (with me in a skirt, blouse and flats) by a young lady peddling QM tours (some of which I chose to buy), who may have been uneducated in the proper etiquette for helping transgender folks.  Or, more likely, she could have had a personal "axe to grind" with the “guy in a dress” concept,  and was expressing her disapproval the only way she knew how, regardless of its extreme non-politically-correctness.  Unlike the gas station incident, this time I decided to ignore the issue.  Pursuing it would not improve the situation, and was likely to chew up more of my precious (and too short) time there.  And it could have resulted in a management apology letter being mailed to the house - not necessarily a good thing in my case, since it could arrive before my return. But rest assured, the incident was given some sunshine on the ubiquitous "how did we do" survey, post-visit.

My return chariot (a Blue Van) arrived on schedule, to carry me back to the Amtrak station.  Its driver was polite, and he used no gender markers for the few interactions we had, though the rear seat belt was a difficult to operate, and he had to help me fasten it.   (I admit to blushing at sitting there in a skirt and blouse, having a man help me with my seat belt!)

Once underway, the traffic got crazy.  And I’d rather the driver pay attention to traffic, than worry about the right way to address me.  As it was, a Californian, crazily weaving in and out of lanes (this one must have been really loco, doing 15 mph over the speed limit while weaving) nearly took off our right front fender in an abrupt and un-signaled lane change.   My driver's quick reaction saved the day.   Blessedly,  we soon were back in my bailiwick, the very art-deco Amtrak station, without casualties. YAY!  (Before you ask, no, my short visit did absolutely nothing to convince me to relocate to SoCal!)

My first stop at the Amtrak station was the Metropolitan Lounge for sleeping car passengers, to drop off my bags till train time.  The girls checked me in, saw my now-female given name, and with my skirt, blouse and other cues, I was addressed as “Ma’am” the rest of my time there.  And as other passengers arrived, I was included in a couple of discussions, as a woman.

I went for a walk around the neighborhood (it was relatively safe during the day…not sure about after 5PM).  First stop, the Avila Adobe, oldest house in Los Angeles (built in 1818).  Typical southwestern adobe style, with a beautiful central courtyard.  Needless to say, Mandy couldn't resist a picture! 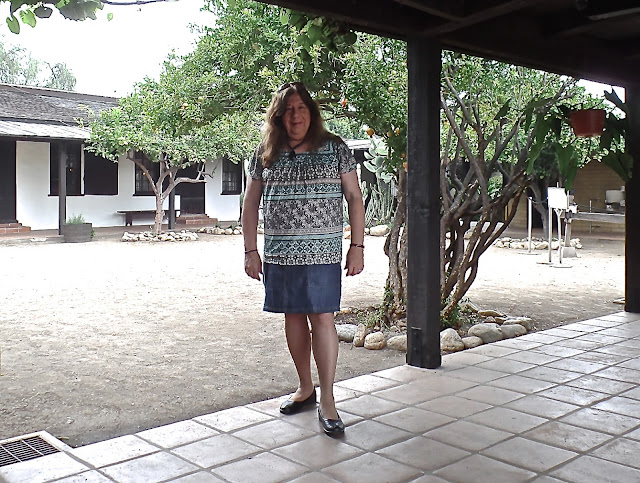 Then I did some shopping in "Calle Olvera,"  the Olvera St. mall  - little shops and restaurants selling things with a Mexican theme – togs, toys, trinkets, and tacos - to pedestrians.  (Some of those pretty dresses were to die for!)  Neat place. If I ever get back solo, I'd love to end up in one of those pretty dresses, but I literally had no room in my suitcase this time!

And though I wasn’t people-watching,  in casual encounters I didn’t notice any folks doing obvious double-takes, like those folks at the restaurant in NYC.  I was just another woman out shopping, enjoying the now 70+ degree afternoon weather in the city. 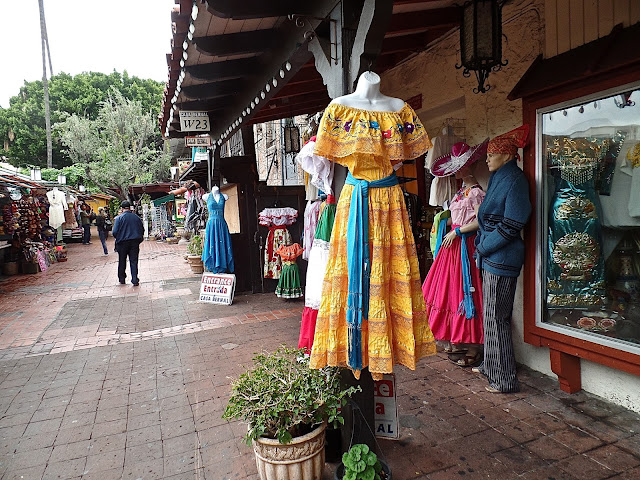 I walked a little farther to the Pico House, a former hotel, long since disused, which was rehabbed as a historic building (and the ground floor opened for special events) since my last visit to the area.   The docent of the art display there was definitely convinced I was female. Then she recommended the fire house a few doors down, as they had a museum of old fire equipment. 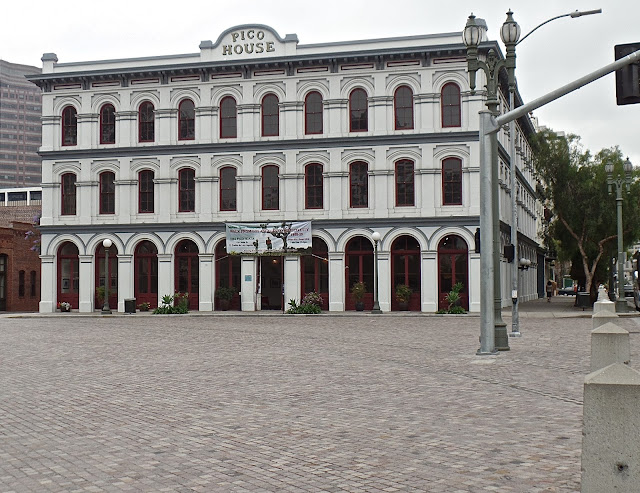 Her suggestion was definitely a good one, except for the minor fact that the elderly male docent there was convinced I was male (despite my feminine outfit), and acted accordingly, with the dreaded "S" word.  Some days you get the bear, some days the bear gets you!  Fortunately after our initial interaction, I was on my own to look around the place, and it wasn't an ongoing issue.

Finally, back at the Metropolitan Lounge in the Amtrak station, boarding time came.   I used the service of a Red Cap – again.  (This could become habit forming!)  What woman wouldn’t want to?  Especially with bags as heavy as mine felt to me.  He addressed me in the correct gender, but unlike other Red Caps, didn’t put the bags on the rail car for me.  He left that to my car attendant, who told the first 3 people he boarded (all men) that their bags were over the weight limit, thus they were on their own to move them.  I began to worry…mine were already close to the weight limit when I left home, and I had condensed my collapsible third bag into the other two before leaving the Queen Mary.  “This yours, Miss?”  “Yes, Sir.”  And he heaved it on to the car, stowing it in the luggage rack.  I guess it’s a known fact that women don’t travel light!

Before the train departed, I took my camera outside and asked if the car attendant would take a picture of me by the car.   He smiled and said something to the effect of “For you, sweetheart, I sure would.  Give me a big smile now!”  And the results… 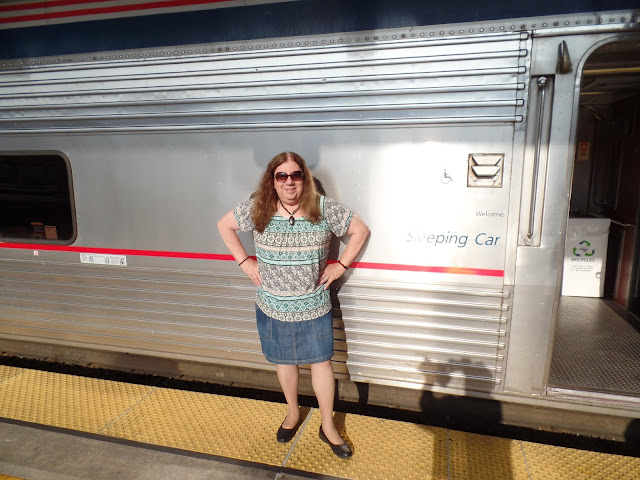 More coming as I get it written!

Mandy
Posted by Mandy Sherman at 3:39 AM