It's inevitable that this wonderful vacation with other old cars would come to an end.  And it did.  However, the drive home yielded a couple of architectural gems.

First is at the intersection of US 40 and NJ Route 581, out in the middle of nowhere.   A lonely and very disused railroad station sits forlornly on a corner, looking disheveled and distressed, beside a commercial building...

At first glance, one might think that it was a long time since trains called here.   But then, you look closer, and find that the station is sitting on a (relatively) new foundation...and one end has been opened up, to form an oversized (but with no door, certainly not weathertight) garage for an unknown type of equipment - which was absent at that time. Where did this station come from?  There was no evidence of a railbed in the area, so why is it here?


From various sources, I found that the station is the former Woodstown, NJ train station, which opened around 1883 and quickly became the center of business activity in that portion of Salem County. Manufactured goods were received from Philadelphia and produce from the surrounding farmlands was shipped to the major cities. In addition, passengers were able to travel on the train from Woodstown to Philadelphia, Atlantic City and New York.

Following World War II and the emergence of the automobile as the most popular mode of transportation in America, the number of passengers transported by trains began to decline. On December 30, 1950 the last passenger train left Salem County.  In December of 1970 the Woodstown Station was moved to its current location at the intersection of Route 40 and Commissioners Pike, for a use that apparently never developed. 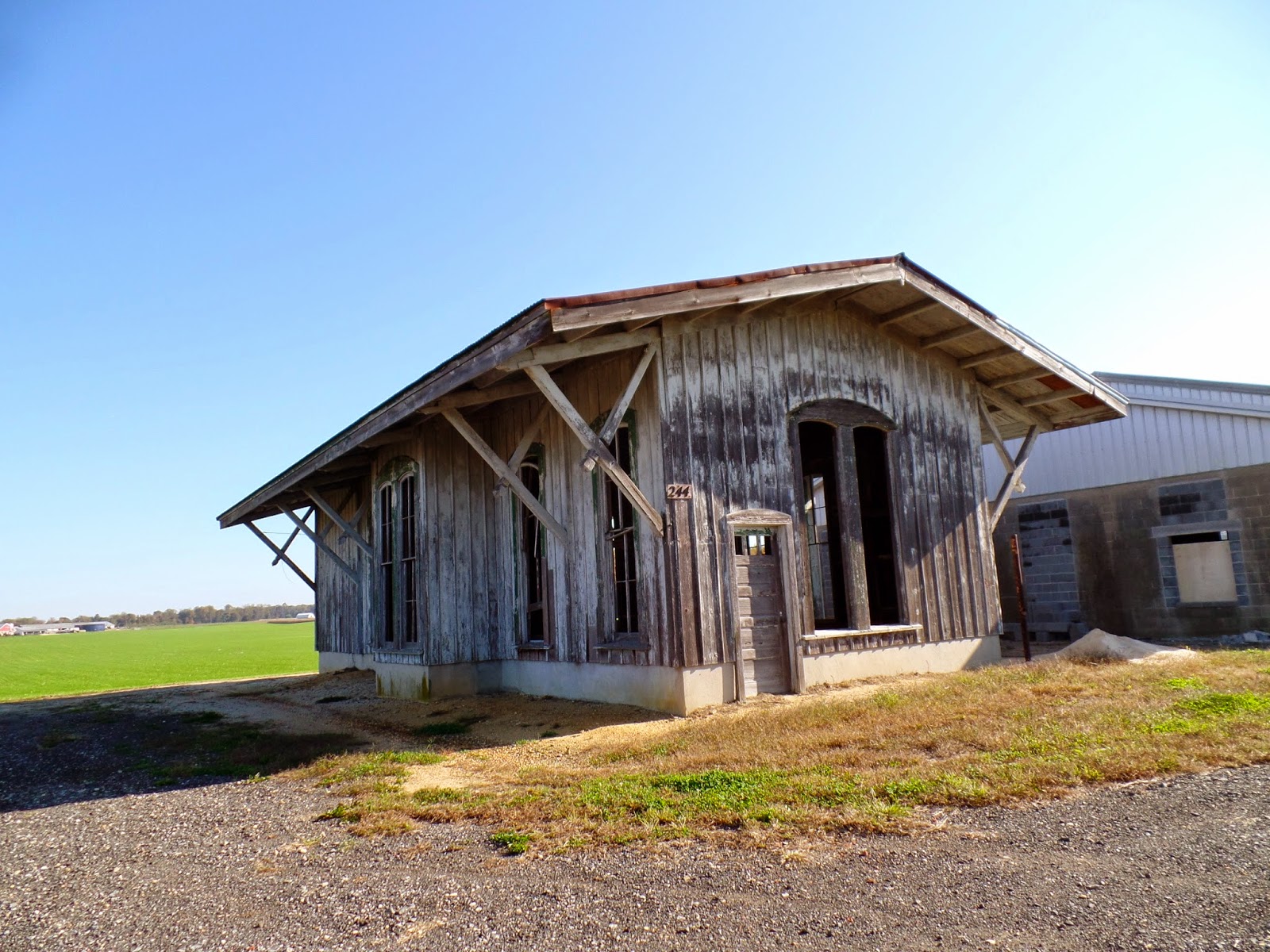 Above is how the station looks today.

There are no panes in any of the windows, and the far end has been opened up, to make a storage shed for some large piece of equipment. 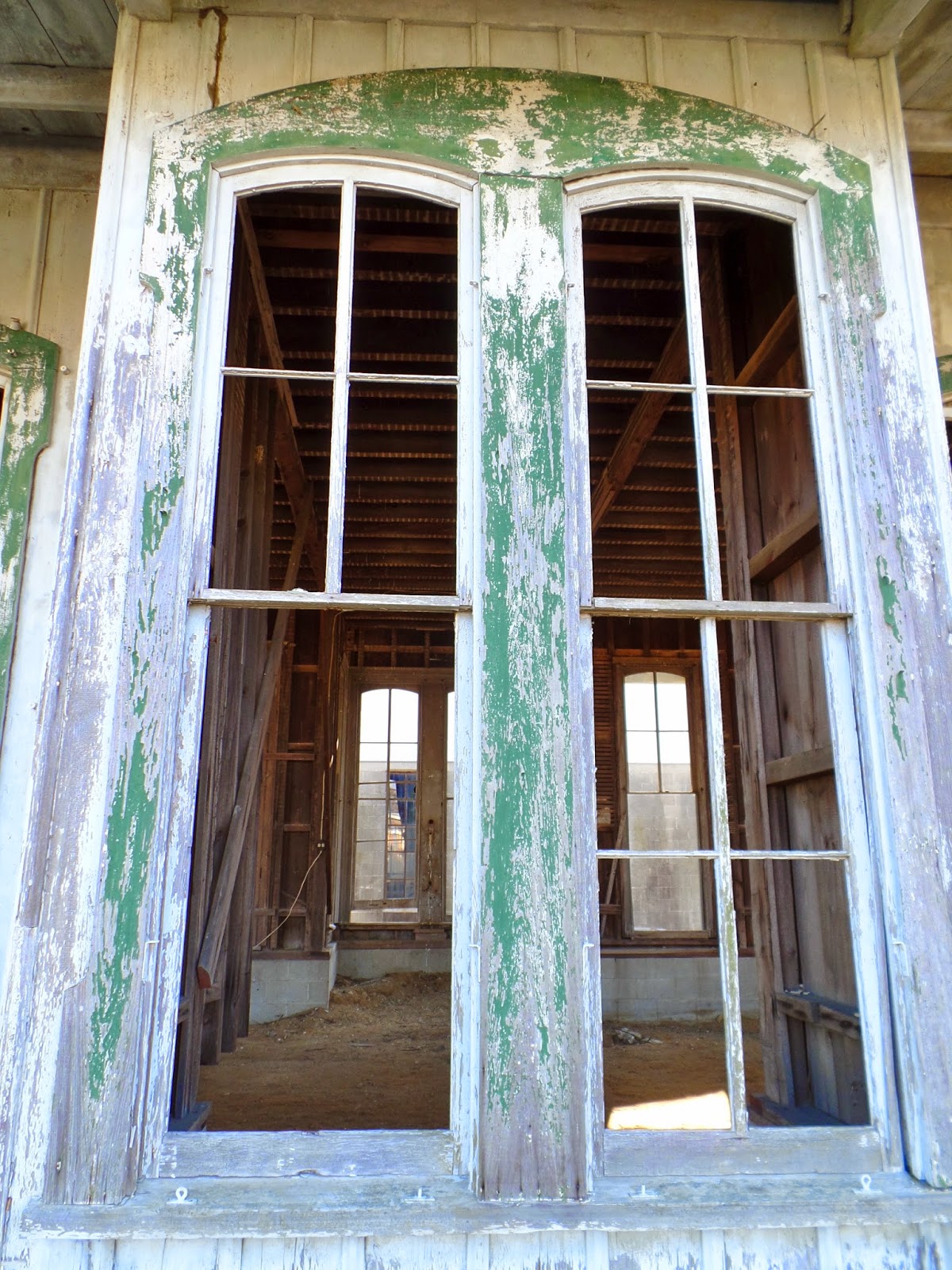 A rather dismal appearance for the completely stripped interior, as seen through glass-less window frames, badly weathered, and with a broken mullion.

So,  what's the skinny on the big fellow below?   He towers over Harding Highway (US Rt. 40) just a bit east of Pittsgrove in Woodstown,  New Jersey.  He advertises the Cowtown Rodeo, which is the oldest weekly rodeo in the U.S.  (Bet you didn't know that little factoid!)  And it was quite well attended, judging from the lack of available parking places! 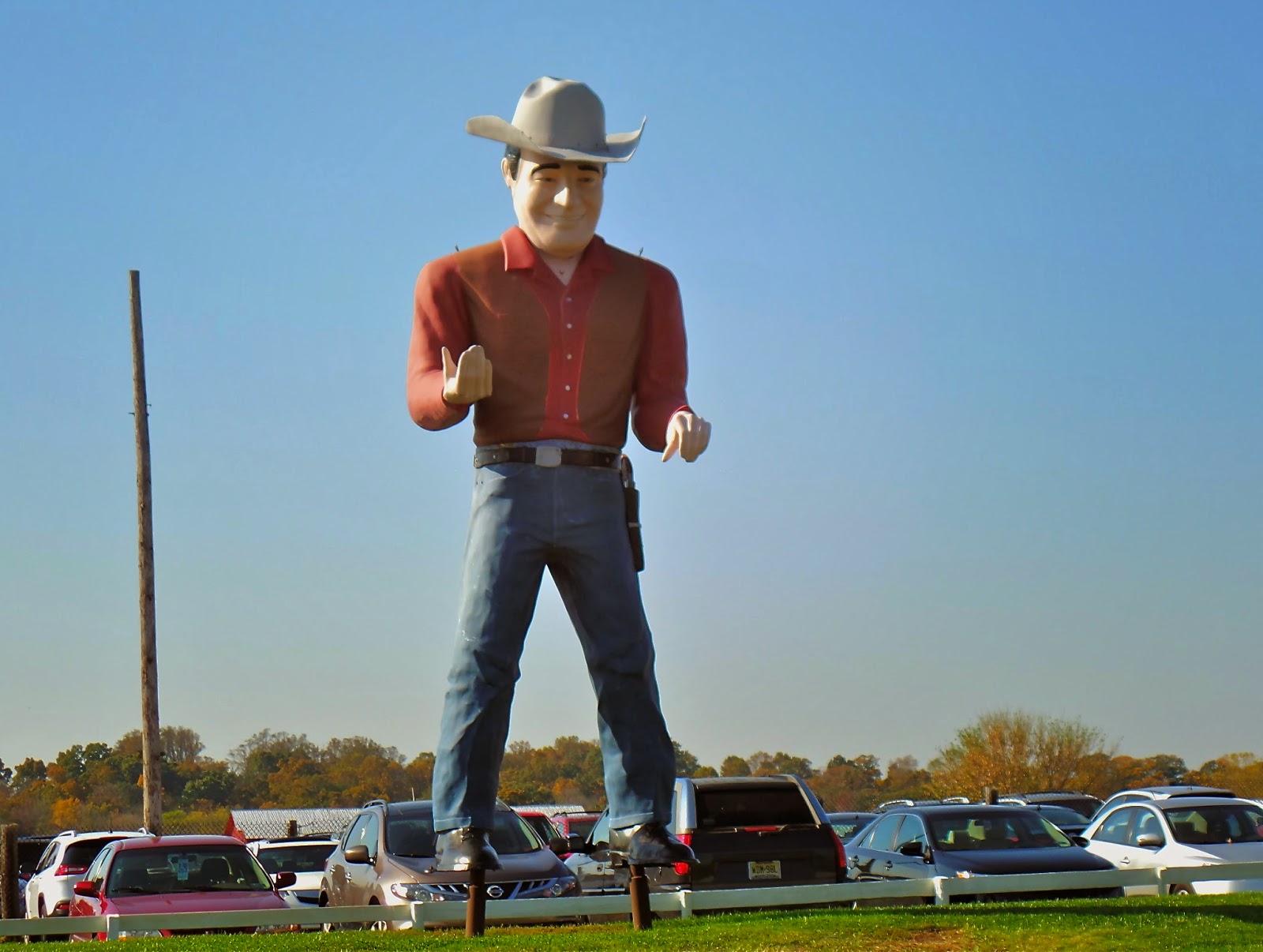 Various sources indicate that he, a re-purposed "Muffler Man" from commercial use, was "bought at an auction in 1975 and outfitted with a cowboy hat and gun."   However he came to be, it's good that this piece of Americana still exists, even if he no longer advertises a muffler shop - in fact, there's no muffler shop in sight.

Thanks for reading my travelogue...hope you enjoyed it!

Mandy
Posted by Mandy Sherman at 4:54 AM