Back in town once again...  Between the visit from the kids and some out-of-town antique car activities, and some previously-scheduled appointments, my time has not been my own recently. Hopefully that will change soon...

My prior post was about the visit with our son and his girlfriend...   We had a great time, and look forward to their eventual return, as well as our visit to her parents' place down south later this summer.  Below is a picture of one of the beaches we visited on the Delmarva side of the bay...very pretty - and clean. (Those little  blurs are an attempt to remove the pix of the kids, for obvious privacy reasons.)   That almost-invisible bridge in the background is the Bay Bridge between Annapolis and the Delmarva.  Looks so deceivingly calm and peaceful from this angle.

It can be a 4-1/2 mile, stunningly-beautiful 6 or 7 minute drive...particularly at sunset.  Or it can be your worst traffic nightmare, with a backup stretching for many miles - which takes hours to unravel! 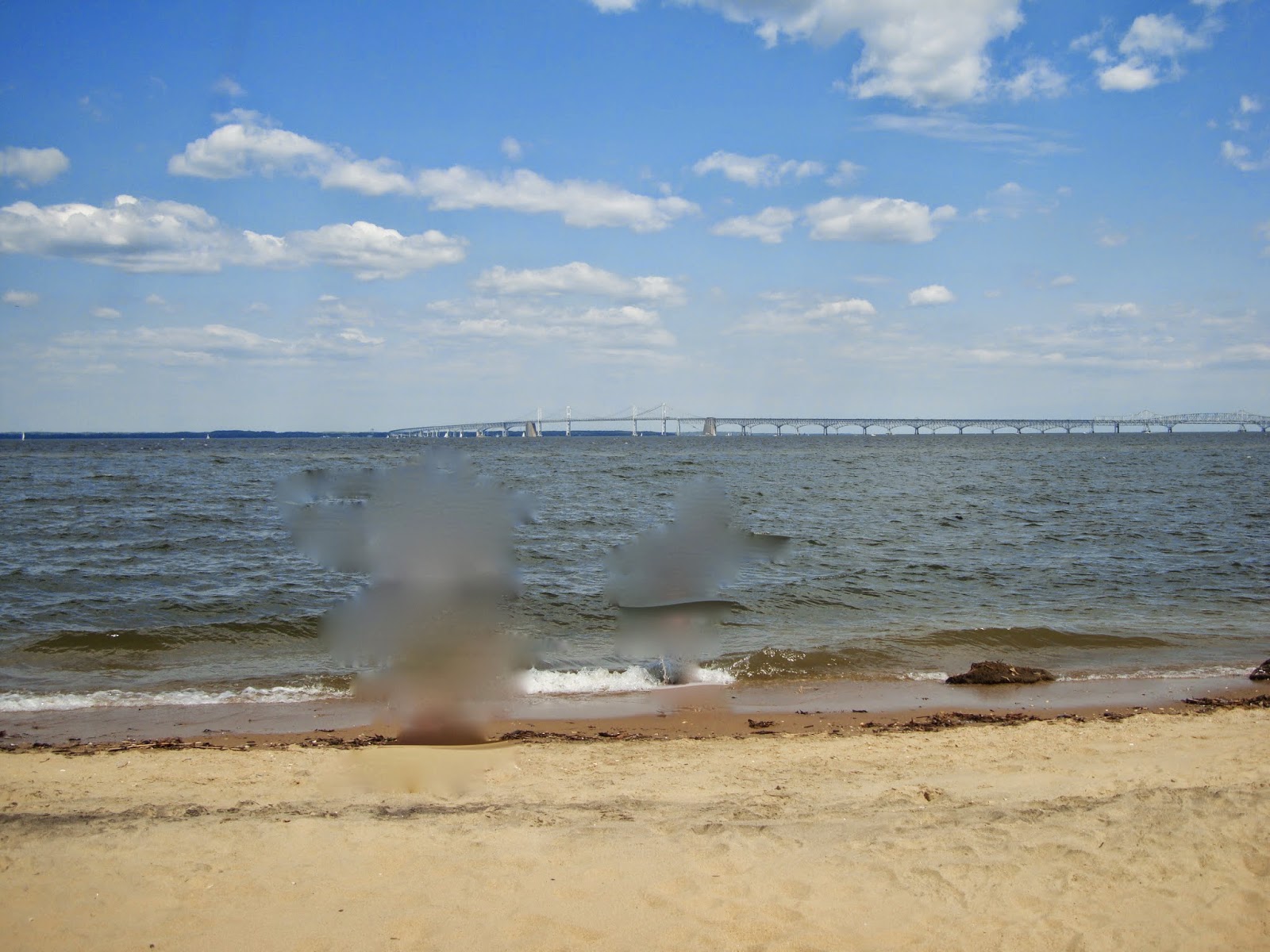 From this spot, in the years before the Bay Bridge came to be (built in the early '50's), a car ferry used to move people and autos between the mainland and the Delmarva, to save people from a four-hour-plus drive around the headwaters of the bay.

After the kids left, we switched gears - into antique car mode, and loaded the old car for a week on the road.  Without boring you by all the minutiae, we spent a week (and 1300 miles) traveling in south-central upstate NY, seeing the many sights the area has to offer.    Particularly notable were the Corning Museum of Glass, the Curtiss Museum in Hammondsport, NY (a lovely little town - would be fun to live there) and for you NASCAR fans, a lunchtime spin around the racetrack at Watkins Glen, with a bunch of other tourists' cars. 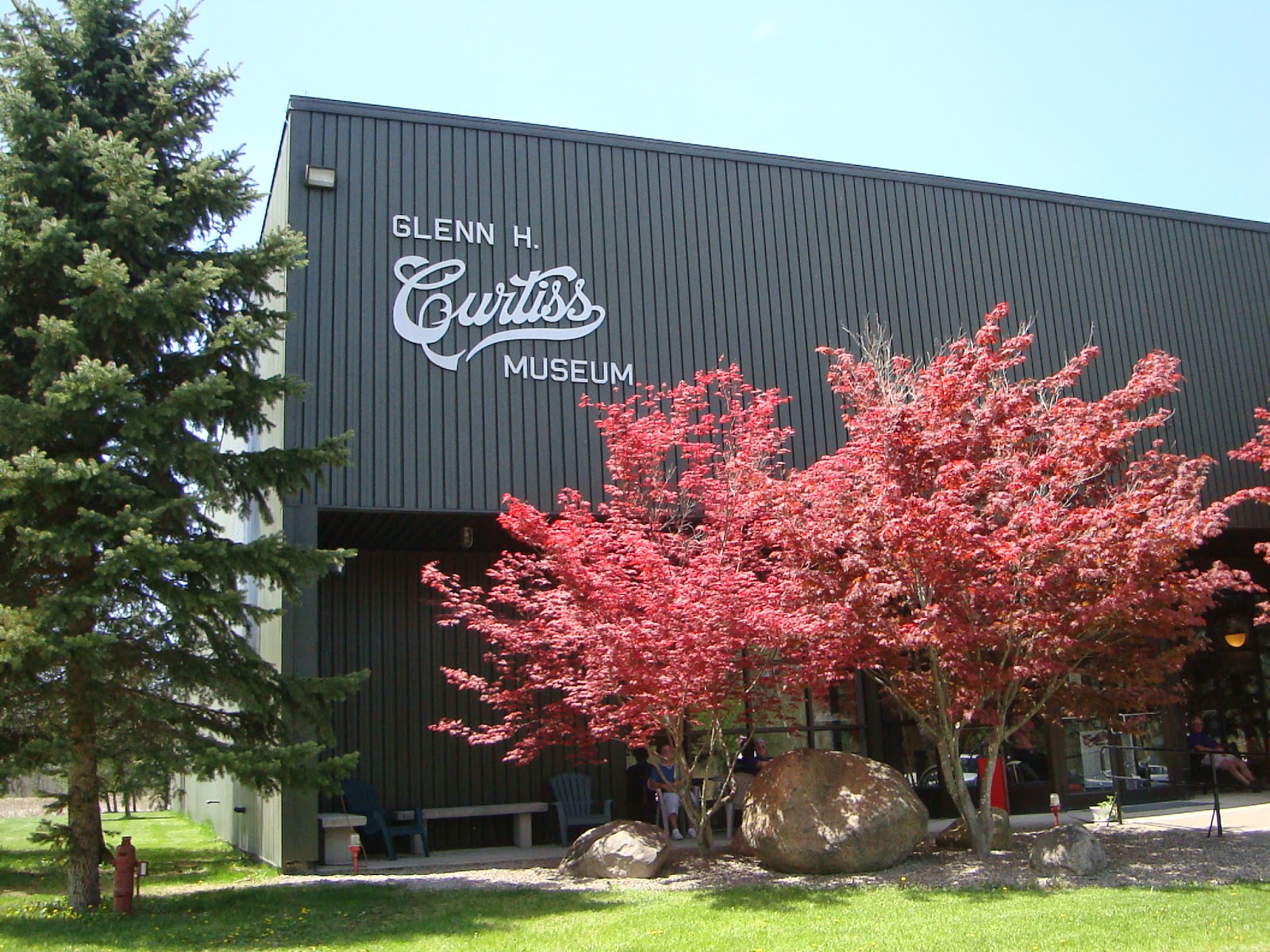 Trees were in bloom, and we were told it was about 3 weeks later than normal due to the cold winter. 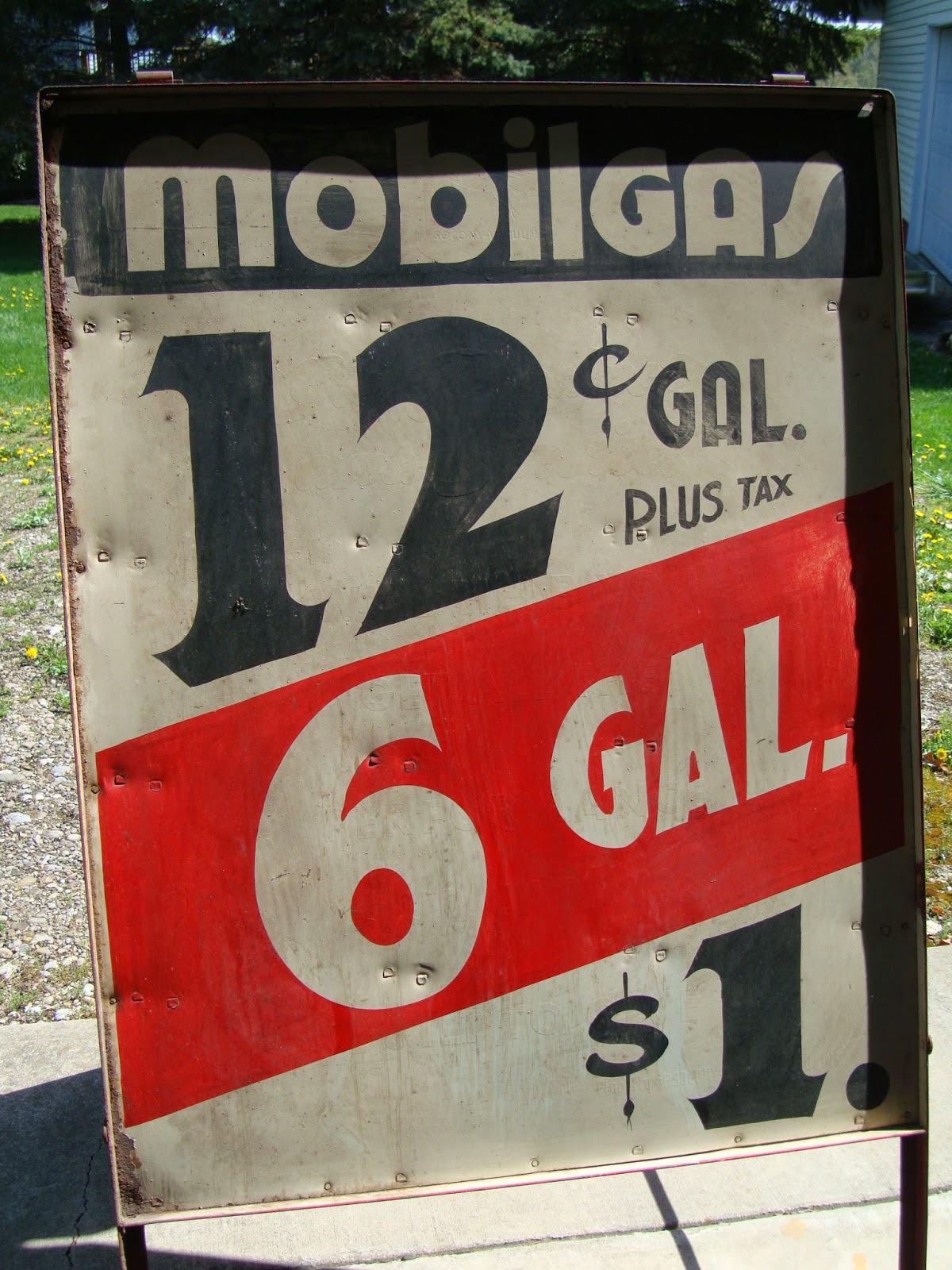 Don't you wish gas was still the price shown in this museum exhibit? 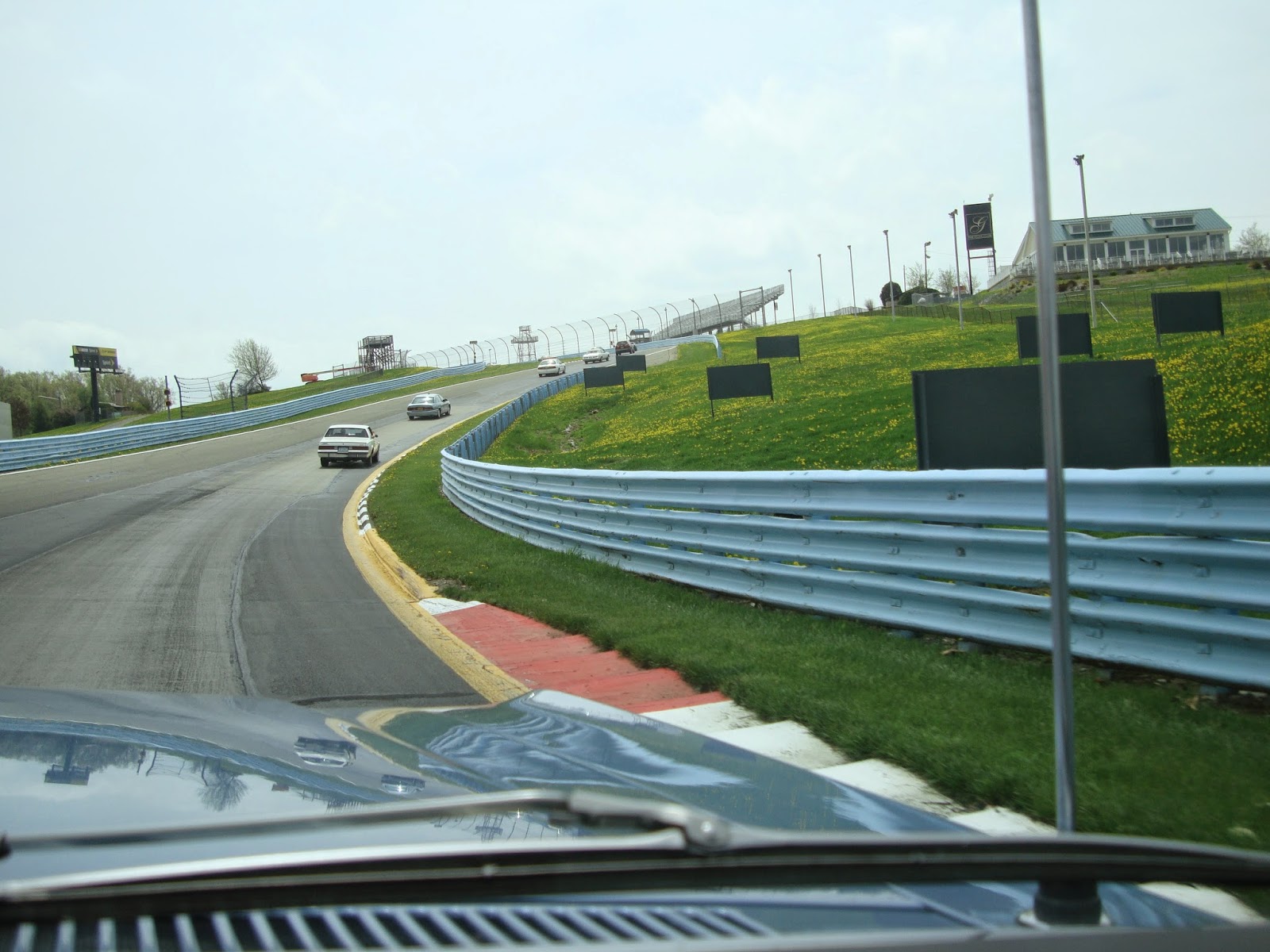 On the track at Watkins Glen...now THAT was fun! 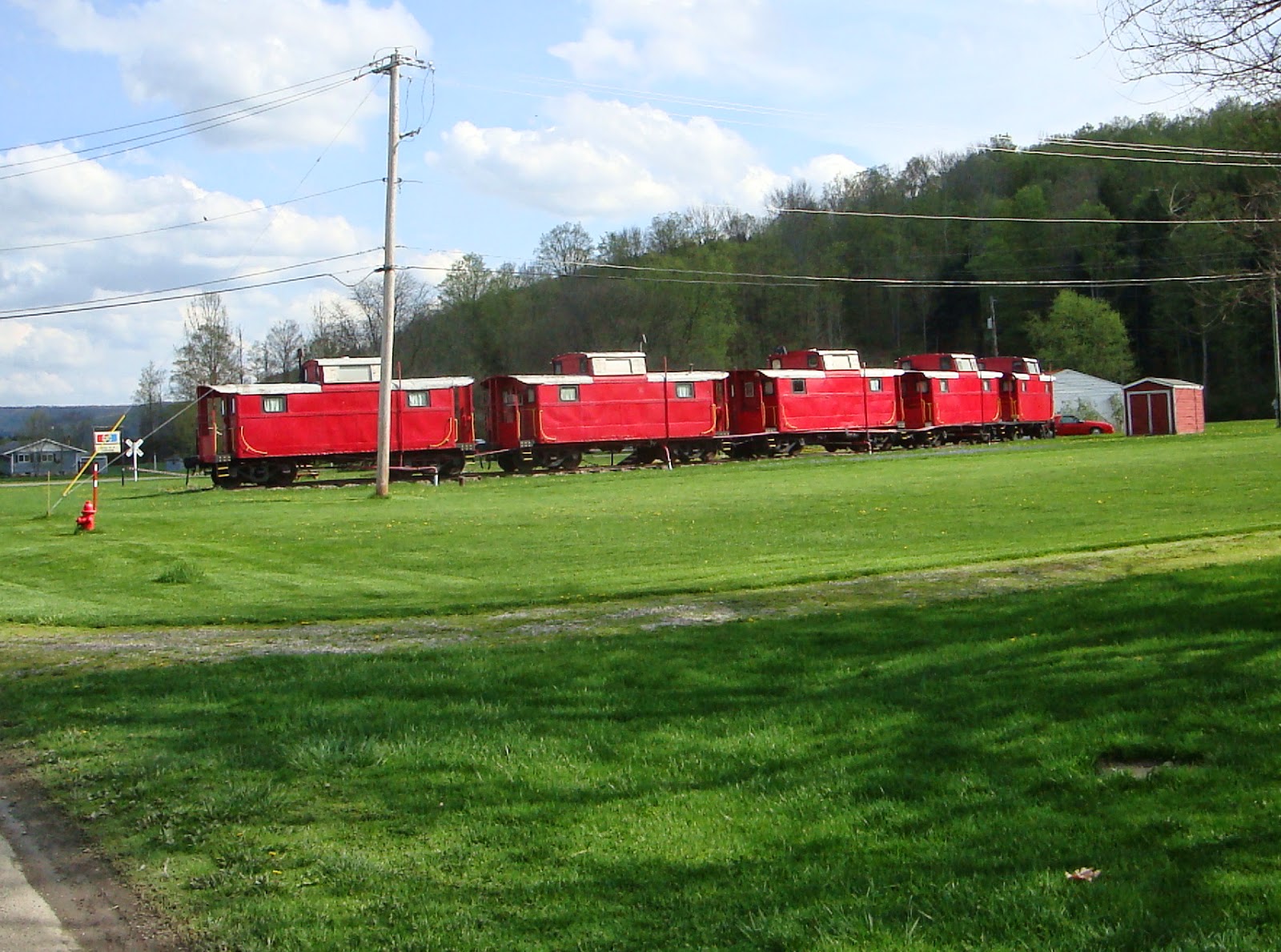 Strasburg isn't the only place to find a Red Caboose Motel...this one is in Avoca, NY! 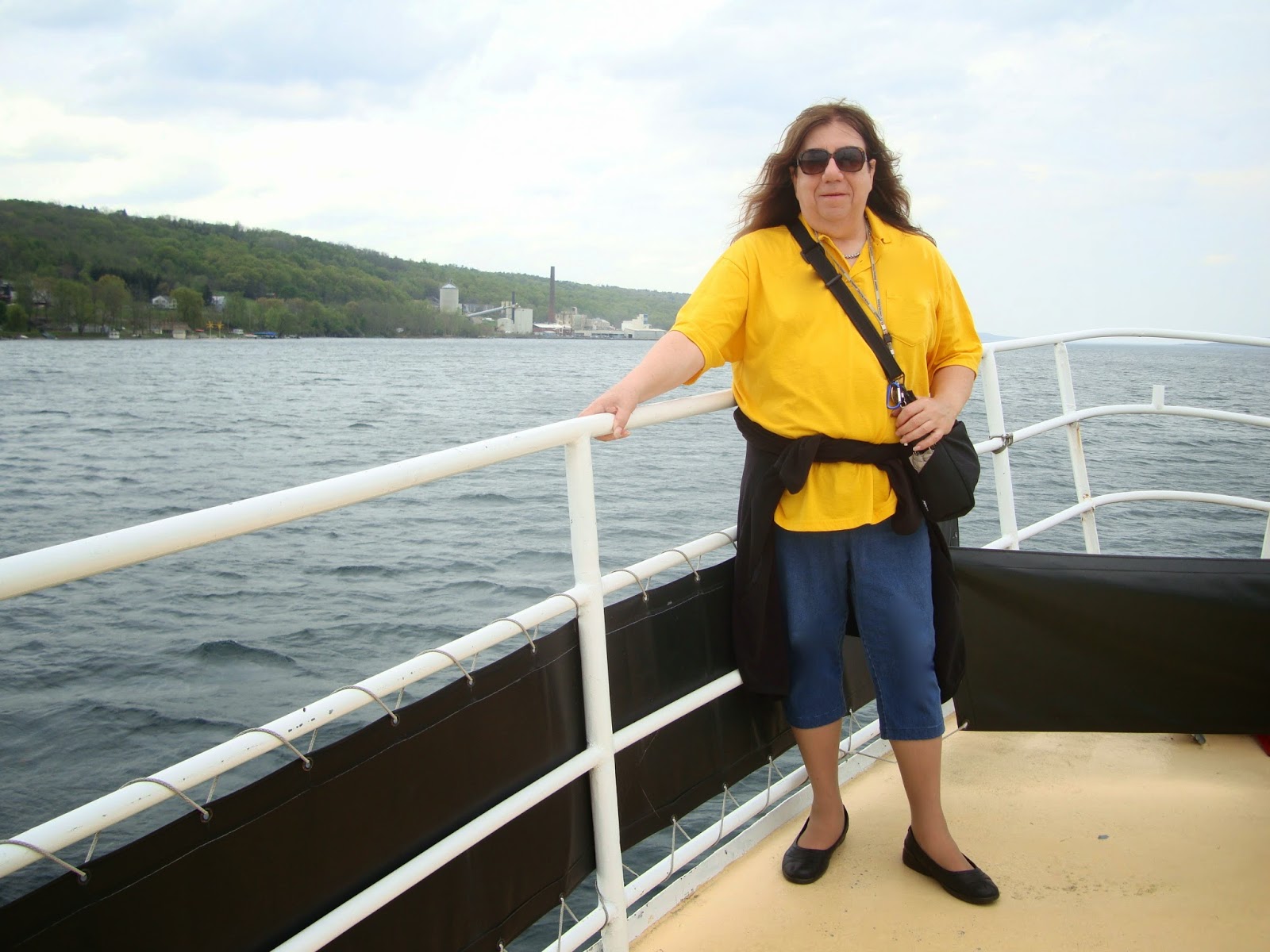 Mandy on a boat at Seneca Lake.  Tripods are wonderful things...

Pedal pushers like these (but in different fabrics and colors) were my typical attire for our entire vacation.  Only twice did I enjoy the privilege of wearing stirrups - the one pair of long pants in my suitcase.  Both occasions were for dinners out, with friends, at nicer restaurants. (And I didn't spill anything on them...)

Rain was in the forecast for several days, and my wife didn't want the suede insoles of my sandals to get soaked. The first day, with rain in the forecast, she suggested "ballerinas look great with pedal pushers, so just wear them today.  You won't be the only one dressed so comfortably.  And, don't forget your pantyhose." How could I forget my pantyhose?  Closed shoes feel so hot and sticky without them...

I was paying attention to the locals as we were "out and about" sightseeing. And, my wife was right...I certainly wasn't "the only one dressed so comfortably."   Many females (of all ages) were wearing outfits similar to mine!  (Well, except for the pantyhose, I guess!)  My appearance must have been sufficiently girly to not attract much attention - except from a few pre-teen and teenage girls on tour at one of the museums.

One difference between my outfit and those of the other women:  my shoes.  Their ballerinas typically were lower-cut and had cute string or bow decorations on the vamp.  About half displayed at least some toe cleavage.  Mine don't.  IF I ever find some girly ones like theirs "which actually fit", undoubtedly I'll be wearing them.  Thus far, however, they've eluded me.

For the rest of the vacation, I just wore my ballerinas whenever it was supposed to rain.  That was apparently a correct choice, as nothing further was said.  Others with us had no issue with my attire...  When we were alone, waitstaff and clerks either addressed the two of us as "ladies" or "folks."  Around others, no gender-specifc pronouns or titles were used. The only times I heard the "S" word was when I was with several men.

It was another fun vacation!