I recently enjoyed one of those weekends away, where I could find at least "some" girl time.  It's been quite a while since my last excursion!

On the way northbound, I came across a dairy store with a very unusual and memorable name.  Unfortunately, it was early morning and the joint wasn't open yet.  (Not that I was really all that hungry for ice cream at 8AM...)  But I'll remember it the next time I pass that way during business hours.  Bet the ice cream is delicious! 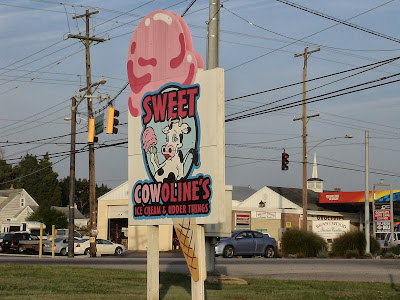 I wonder if they have good ice cream?  And also about those "udder things"...

Once inland, beyond the temperate coastal areas still under the effects of relatively warm Atlantic waters, it was easy to tell what the season was.  Orange pumpkins were in the fields and at the produce stands, and farmers were busily harvesting their brown corn stalks.   Though the weather was relatively hot and humid (mid 80's Fahrenheit), leaves on the trees were preparing to burst into full autumn finery, as if to predict another winter.  There was still a week (or two) till peak color, with a lot of green still showing.  But summer's green leaves are definitely not long for this world! 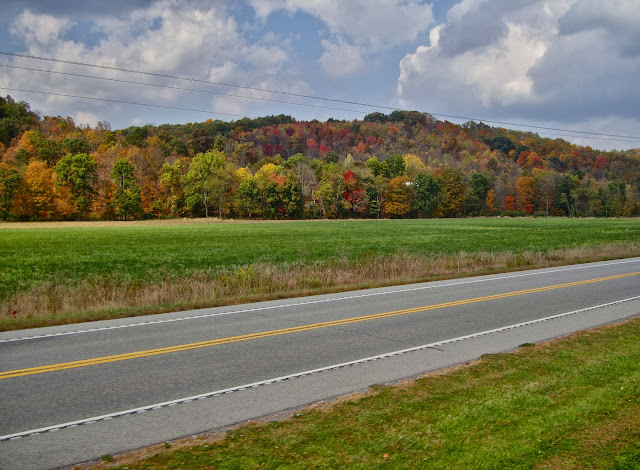 I spent some time visiting relatives in Pennsylvania (in androgynous mode), and exploring a couple of railroad sites there.  Most notable was the new "Steam into History" train ride on the Northern Central Railroad, an old Pennsy line from Baltimore through York, to Harrisburg, over which Abraham Lincoln rode enroute to Gettysburg, where he gave his storied "Gettysburg Address."   These same tracks carried Lincoln's funeral train two years later.  I can remember seeing passenger trains of one diesel engine and one or two coaches on this line during 1970 and 1971,  as the line passed by my place of work at the time.  The line was damaged by Hurricane Agnes in 1972 and was closed to freight traffic (by then Penn Central) shortly after that.

The steam engine looks like a historic artifact.  However, it isn't.  In reality, the William H. Simpson #17 is a faithful replica of the Civil War steam engine (completed in July of 2013) that carried Abraham Lincoln to deliver his now famous Gettysburg Address. It was based upon the locomotive and tender previously constructed and provided at the Golden Spike Historical Site in Utah and arrived in New Freedom on July 25, 2013, along with newly-built "hstorical-style" coaches. 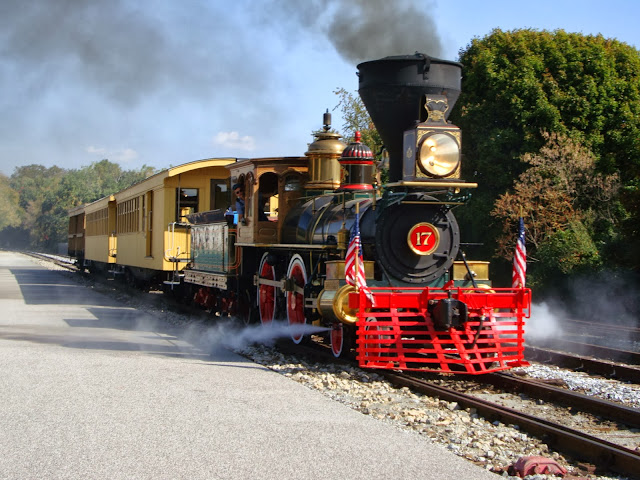 My weekend definitely provided this girl a rare chance to spend some time out and about.  Though still not ready or willing to fully dress in the presence of relatives, sightseeing provides many wonderful opportunities!  Nobody really cared how I was dressed - to them, I was just another girl on the street, albeit one toting two cameras and a big (translation: old and heavy) tripod.

Locals addressed me as "Ma'am" during the inevitable interactions.  My favorite one was the 50something gentleman who said "Good morning, young lady, how are you?"  Oops, not going to get away with a one-or-two word reply here!   So, I summoned the best feminine voice I could (which is far from perfect.)  "Just fine, sir, thanks for asking, and how are you?"  "Just fine, thanks.  Enjoy this lovely weather!"  "I certainly will, you too!"  And we both walked on.

While waiting for the train to depart, so I could get some pictures, I stood around under a shade tree, with several local ladies who were noisily chatting about their own personal issues.  They didn't change their discussions when I arrived, and through my Foster Grants, I couldn't see anything to indicate they took me for other than what I appeared to be.  Since there is a bike trail alongside the tracks, hikers and bikers passed on by without issues, glances or giggles (and some of them WERE teen girls.) 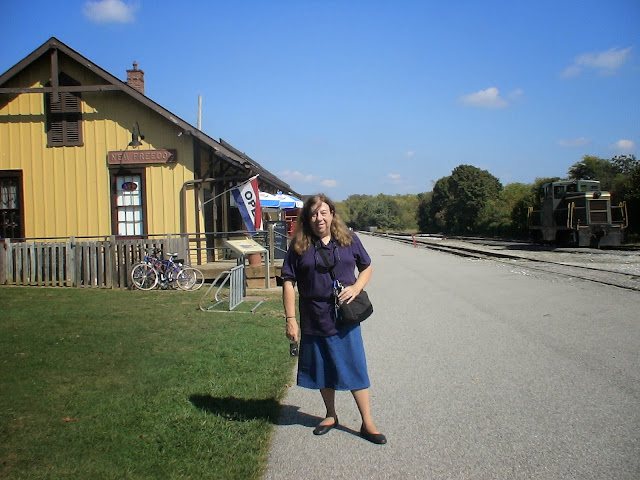 Yours truly at the restored  (in 2003) Pennsylvania RR station at New Freedom, PA


Hmmm...the town's name was New Freedom....and I really did feel free there!  Let's hope those pleasant vibes stick around!