In life there are many fake things.  For instance, fake Rolex watches for a "mere fraction of the cost of the real ones", fake nails (yours truly has a set of those), fake money (to pay for that fake Rolex), and most recently, according to Washington, "fake news."  But there's one everybody has missed... 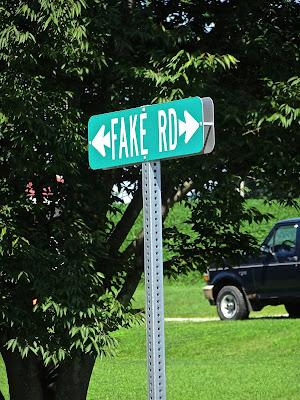 On my recent excursion into Pennsylvania on back roads, not far south of Harrisburg, I did a double take as I passed this sign, and went back for a second look.  Yes - it was a real road name sign, with a couple of houses down the street.  I'll never know the meaning of the name....whether it's a demonstration of someone's political philosophy, or maybe there's some other explanation.   But there WAS a real road under my wheels...and it wasn't fake, even if it was Fake Road!

Following is a picture of the new blouse I got for a song at a thrift shop, which still had the "new" tag.    I've worn it a couple times while the wife has been traveling,  mentioned it casually to her, and plan to just put it into circulation.  We'll see what happens from there...

This little outfit works very well...except for one minor problem: with my skirt:  as you can see below, whichever side my purse is carried on, the skirt tends to ride up more than it does with others.  Yet I love the skirt...it has pockets!   Maybe a different purse would work better...but for now, maybe I'll wash it and put it away till I figure out how to fix that.   Or maybe I'll just decide to keep tugging the hem down...I see girls in short skirts doing that to the hems on their skirts quite often! 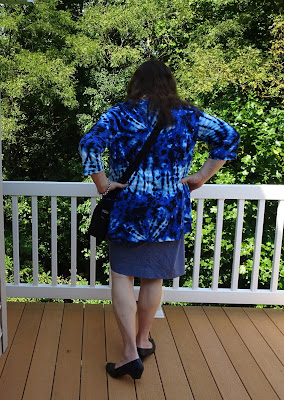 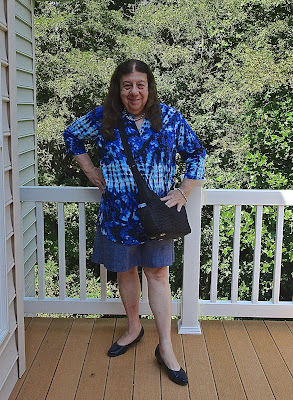 I like the overall appearance - especially with the feminine double V neckline on the blouse.

Or maybe it's time for a new purse instead???  I'll have to check the thrift shop for one of those...LOL!