On the road (yet again): final.

On my 4th and final day, I took a slight detour to see another piece of history, in a town
with an unusual name: Burnt Cabins, PA.  A grist mill exists there, which was built in
1840 and continues to churn out old-fashioned flour in the same manner as it did back
then.

The town's unusual name came about from the cabins of early settlers in the area being
torched by provincial forces in about 1750, to satisfy Indian protests against white
trespassers on their lands.  So, the name is a reminder of troubled days on the
Pennsylvania frontier.

From Wikipedia, a more detailed summary:  "As a measure of good faith with Native
American nation and no small degree of "realpolitik" with their French rivals in the area
comprising what is now western Pennsylvania and the Ohio Country,  British colonies made
pacts agreeing to keep their settlers east of the Appalachian Mountains.  Despite the official
government position on the matter,  settlers from the east in PA and from the south in MD
and VA began to trickle into the area that is now Fulton County and other regions.  By
mid-1749, the various groups of the Iroquois Confederation felt threatened, thus
they made official protests to the Provincial government in Philadelphia."

In response to the complaint of July 18, 1749 the Lt. Governor of the province...issued an
edict to all British subjects...to remove themselves, their families and effects, off of those
lands.  Along with this was a promise that they would take more direct action in 1750.
Thus, in May of 1750 the provincial government sent agents to remove the white squatters
from their cabins and settlements.  These agents were accompanied by delegates from the
Iroquois nation to show them the King's orders were being fulfilled.

About 60 squatters were found on Tuscarora Mountain.  Original plans were to arrest,
convict, fine and imprison them, but 2 of the first 5 arrested fled, telling officials "you may
take our Land and Houses and do what you please with them....but we will not be carried to
jail."  And a third squatter met the officials with a loaded gun.  (Nothing was said regarding
his longevity...)

As a gesture to the Indians, provincial officials decided to burn the cabins of the town (then
named Sidneyville).  In reality, they only burned 3.  But that brought a period of temporary
peace to the area.

It was not destined to be permanent.   By 1755 settlers had returned en masse.   Shawnee
and Delaware Indians took matters into their own hands, attacking in great force, in what
became known as the Great Cove Massacre.

Subsequently, Sidneyville was reborn, but with a new name:  You guessed it...Burnt Cabins. 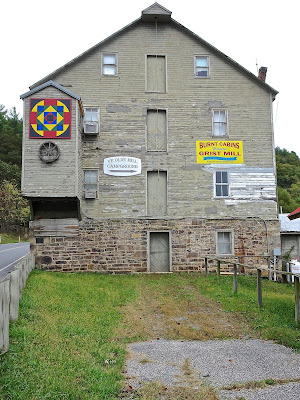 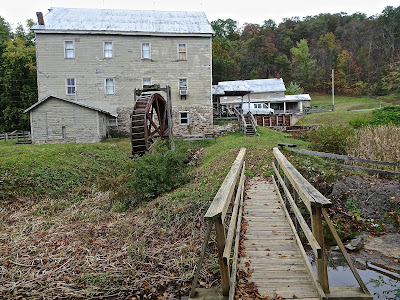 There's a campground as well, with a decently stocked store (below), which provided
provisions as there weren't any stores in the area for grub...   As for meals - only found
one, a bar, and Mandy didn't feel comfortable walking into a bar alone.  Sitting in the
car, I shivered to myself, just at the thought of  6 or 7 carloads of male eyes staring
at me.  UGH!  (From someone who can get meals and basic supplies within a 5 minute
drive from home, living out here in the hinterlands wouldn't appeal in the slightest.) 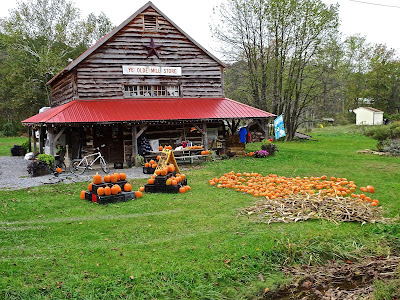 I made a quick stop at the Lower Tonoloway section of the C&O Canal in Hancock, MD.
About a half mile of the canal has been restored and turned into a local historic site.   As
info, the canal operated from 1831 until 1924, along the Potomac River between Washington
DC & Cumberland.   It required 74 canal locks, 11 aqueducts to cross major streams, more
than 240 culverts to cross minor streams, and the 3,118 ft  Paw Paw tunnel in West Virginia.
(I visited Paw Paw Tunnel as described in the following post:  "More touring, and Abraham
Lincoln", published 9/1/15.)

There are two paths one can choose to walk…the paved old Western Maryland Railroad line on
the city side of the canal (the RR was abandoned in the early ‘80’s as duplicate trackage - parent
company (CSX) has rails on the other side of the Potomac) and the unpaved canal towpath on
the river side.   Right alongside the Potomac River, it’s a beautiful place to relax and/or launch
your small boat, or rent a bike ($7/hour, or $35 a day.  Sounds lucrative, doesn't it?    I'd
happily rent out my own bike for $35 a day!) 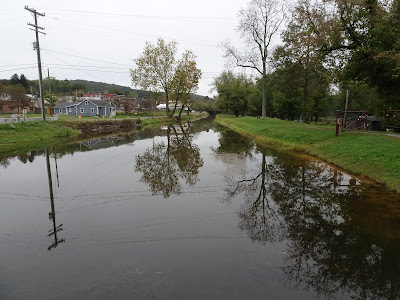 And my final selfie:   At the canal park, in view of the Potomac.  At the bike rental place I
was addressed as a woman, and the ladies I passed all smiled, some with relevant chit-chat
about the weather.

Very validating...  How do you spell "7th heaven?" 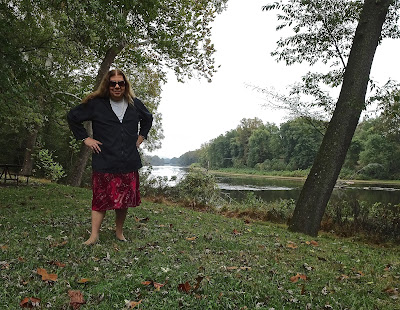 You're not seeing things...the trees are growing at an angle, and I'm standing up straight.
Wonderful effect, and it's not an optical illusion!


Then, after a quick visit to the potty - a porta pot, for those who wondered - it was off for home.  As
usual, the traffic on I-70 was not good...but at least there were no backups at or on the Bay Bridge.)

My major observation for the entire trip was that I did NOT hear the dreaded “S” word at all.  YAY!!!!   (Even in this politically-conservative geographic area...which still sports many exquisitely-preserved "left-over" Republican campaign posters from the 2016 election season.)

Yes, I was referred to as female by servers and individuals part of the time, but more often it
was simply in non-gender-specific terms.  (Which is the safest course for the “I’m just not
sure” crowd - or for those who disapprove of TG's, but don’t want to openly stir the pot.)

Either way was/is fine with me.

And being out and about amongst the public is a wonderful experience...

Now, I await my next excursion...