Whatta mess, and Happy Holidays to all...

This was started on the day I had the broken tooth removed...

To bring you up to date,  the other day I was enjoying a delicious, soft brownie treat (without nuts). I heard a crunch, then immediately noticed a foreign object in the brownie.  It was the remains of a cap, and the top of a back tooth was missing.  Next day, I made an emergency trip to my dentist to see if he could glue it back on.  Diagnosis was: the post was loose.  He pronounced it a total loss, because the underlying tooth cracked to the tip of the root.  And he had no suggestions as to why this would happen while eating a nice, soft, brownie sans nuts.  Then he referred me to the oral surgeon for its removal, the following day.  Oh, great...

Needless to say, I was not looking forward to the extraction, having lost two other back teeth for the same reason.  Because of that, and other ongoing issues, I found myself writing this note in bits over the next week.  When I went to the oral surgeon for the extraction, I wore my denim leggings, black tights, black turtleneck and ballet flats.  Nothing overly feminine...well, maybe the shoes.  Not exactly presenting as female, but definitely as androgynous.

I'm back from the dentist now...with all the pain you might expect from a tooth extraction.  Whatta mess.  You know what I wore, see above.  I was pleased that the oral surgeon (female) and assistant (male) both used "she" and "Miss" often, once I was seated in the chair...it was my first time with both of them.  I did hear "he" from the assistant early on, so I know beyond a shadow of a doubt that I was clocked...but hearing appropriate pronouns the rest of the time sounded nice nonetheless...   I wonder if they had a little "discussion" when they both left the room at the same time?  Guess I'll never know for sure.

The next day, as I was driving in the antique car, I stopped in at the tire store where I bought its new tires.  The guy who waited on me said "I remember your car, Ma'am.  How can I help you?" I asked if they would be able to check the tire pressure for me each spring, after the weather warms up, so I don't drive on underinflated tires.  "Certainly Ma'am, and there will be no charge..."  That's great news...I didn't want to have to buy a compressor!


My follow-up visit to the opthalmologist went well a couple days ago.  (In case you missed the complete story, read my blog titled "The past couple weeks",  dated December 2.)  The Posterior Vitreous Detachment and associated torn blood vessel have healed, and the vitreous fluid has partially cleared. He wants me to be seen again in 6 months by a local eye doctor.  But did you know that you can have freckles (you know, like the freckle-faced kid) INSIDE your eye?  I didn't either, but I have one, which he found in his very thorough exam.  It will bear watching in the future.

And I found that I also have something called occasional "painless ocular migraines?"  Never heard of those, either!  But a symptom I've noticed in that eye since this incident occurred, was given that diagnosis.  No meds are needed for it at this point, but we'll see what the future brings.  (I'm having another of those "migraines" as I write this...ugh.)

My own issues notwithstanding, I'm wishing each of my readers a wonderful Holiday Season, and a very Happy New Year...better days are coming!   And to put you in the mood for some Christmas snow, how about a picture from the March 2009 archives, of an Amtrak Acela blasting through Odenton, MD on the Northeast Corridor, kicking up enough fresh snow that the rest of the Acela trainset disappears. 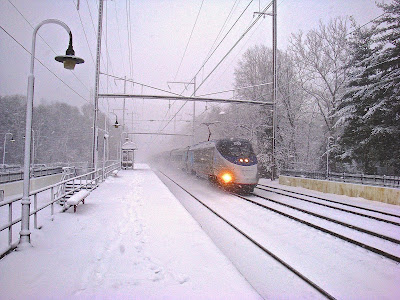 For those of you with extra sharp vision, you might notice that the locomotive number (2009) is the same as the year the picture was taken...enjoy!