If you don't like things mechanical, and things which no longer operate, this post most likely won't be "your cuppa tea."  At the time the pictures herein were taken, I hadn't yet begun to wear women's clothes every day - my attention was focused elsewhere, namely working.  In fact, had I been in a dress on this trip, my legs would have been exceedingly cold - AND, I would have been one of the few girls there!

The topic of this blog is the East Broad Top Railroad, a central-Pennsylvania narrow gauge (3') hauler.  This railroad existed mainly to haul coal mined in the nearby Broad Top coal fields, to interchange with the PRR in Mt. Union, PA.

Its mainline was completed from Mt. Union, PA to Rockhill Furnace (Orbisonia Station) in August of 1873 and extended to Robertsdale PA by November, 1874. (Coincidentally, that was in the same time frame as  construction of its better-known 3 foot gauge counterpart, the Denver & Rio Grande, out west.)  The EBT was 33 miles long and (at its peak) the railroad had over 70 total miles of track.  Passenger service was discontinued in 1954 with the closing of the last coal mine, and the EBT operated in freight service until April 14, 1956, when it was unceremoniously shuttered.

Subsequent to discontinuance of all its service, the EBT was purchased in its entirety by Kovalchick Salvage Company of Indiana, PA.  It was not immediately scrapped, and in 1960 KSC began limited passenger excursions.  Life continued for the EBT - with summer train rides and periodic extravaganzas, with the encouragement and support of KSC.

The following pictures, scanned from snapshots in my archives, were taken during one of those extravaganzas, a "Winter Spectacular" operated on February 16, 1980.  This afforded me a chance to both ride trains and "play trackside railfan." Mother Nature accommodated, by setting the scene with just a dusting of snow, not enough to make the long drive to and from into a death-defying hazard.

The first picture is from the platform at Orbisonia Station, of two steam powered trains still at the shop, awaiting dispatch.  Notice the tall smokestacks at the shop.  That was another highlight of any visit, You can see that there were quite a few guys taking pictures! 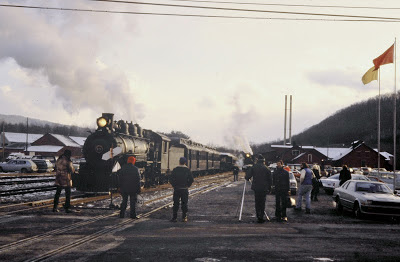 Then I ventured out on the main line to catch some narrow gauge steam in action... 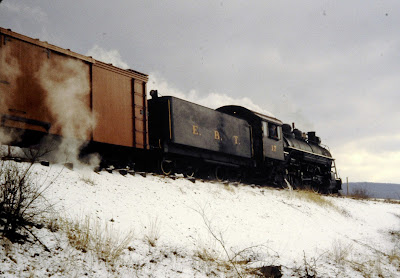 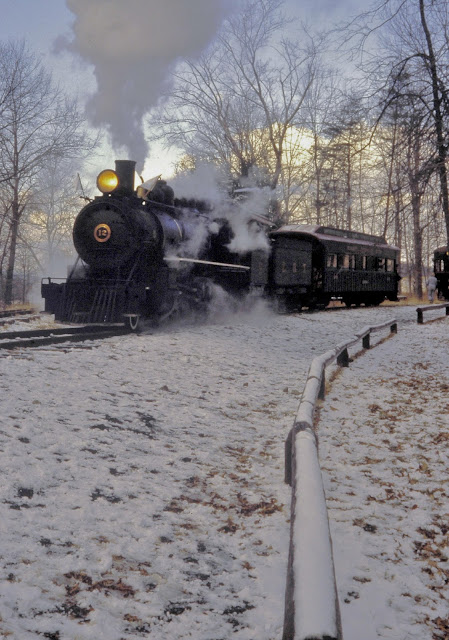 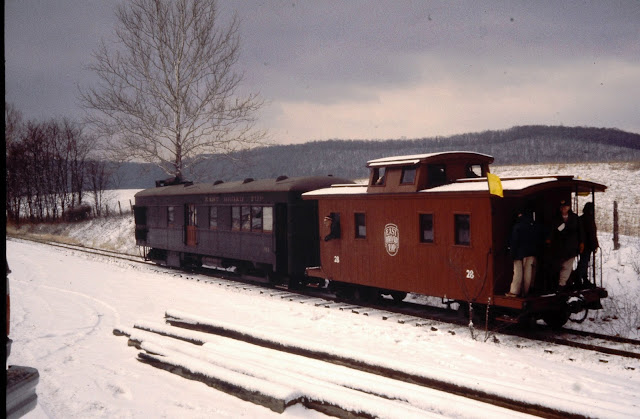 And back to the shop for a tour... 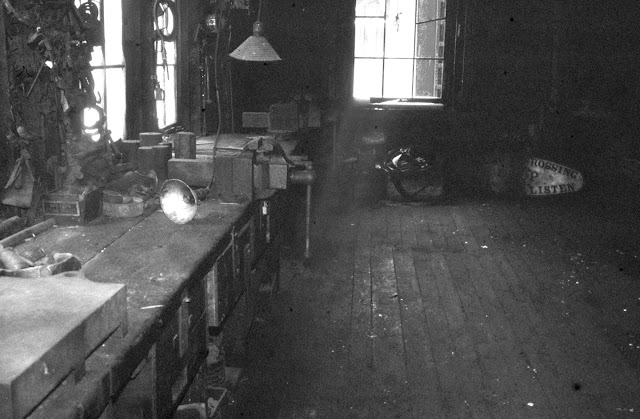 Inside the shop building, things appeared just as they were on April 14, 1956.  Notice the old Rail Road Crossing sign leaning against the wall in the upper right side of the picture.

The last "lonely steam whistle" may have already echoed in the Aughwick Valley...two years ago, in the fall/winter of 2011.  (You can get the flavor of EBT whistles on YouTube - here is the url:  http://www.youtube.com/watch?v=cv7q6Jz2U5k )   Unfortunately, it's been reported that the operating lease between KSC and the EBT's contract operator expired in early 2012, and terms of a new agreement have not yet been agreed upon, as of June 2013.   Thus, no public operations have been scheduled, or have occurred.   Facilities are reportedly being maintained by a skeleton staff and volunteers, and the railroad's future is cloudy.  There are reports that some of the EBT hopper cars, which have been rusting away on sidings, have been marketed for sale - hopefully for preservation.  And a preservation group would like to acquire the railroad...but that takes money.

For the time being,  the EBT remains authentic, down to its last detail. It provides a faithful portrait of narrow-gauge railroading from the first half of the 20th century, complete with original EBT locomotives, rolling stock, depots, shops, and round-house.

Keep your fingers crossed that this post can be updated at some point in the future with pleasant reports of service restoration. I would love to be in attendance for that!  Demise of the EBT would be a very sad event indeed.

Posted by Mandy Sherman at 4:59 PM