What is it with Toilet Paper?

WHAT IS IT WITH TOILET PAPER?

For some time we've been planning a trip to visit our son, DIL, granddaughter and the in-laws in TN.  Were to leave this morning (Sunday.)

Late last night, we got a call from our daughter-in-law in, who advised us they just found out that Saturday at work, her dad came into contact with an individual who is symptomatic and is likely at the very least COVID-19 positive.   The whole family - including herself, our son and granddaughter, her parents, and her brother who is visiting - faces possible quarantine, and if we go, we would be included.

Since we'd be 'camping' alone in their partially finished "new" old house (fortunately finished kitchen, bathroom, HVAC and full electricity,  but minimal furniture and no TV or internet), we decided with much sadness and regret, it's "game over. - trip postponed for now."  We are both over that age which would expose ourselves to added risk. :-(   So we'll be staying home, and FaceTime them instead.  At least, till things improve.  Someday soon?   Hopefully. (But we're far from confident about that.)

However, we had earlier received a call from them, that all stores in their town are out of soft goods such as tissues and toilet paper. Tissues? Those I can sort of understand, since they're not terribly useful unless one is sick. But TOILET PAPER? Same thing occurs whenever snow is forecast - even as occasional flurries with no accumulation. At that point, the hot items are "milk, bread and toilet paper."

As perishables, milk and bread are sort of understandable. Even we don't keep a huge supply of milk on hand. (Bread - well, yes, in the freezer.) But, once again, TOILET PAPER? Is it universal that nobody buys toilet paper till using the last 4 sheets of their last roll? And that the mere forecast of three flakes of snow is enough to cause folks to clean out every roll in every store within 50 miles?

While we don't need any soft goods (had purchased TP and tissues ahead, to take some to the kids anyway, which is now added to our usable inventory), I checked while at the store, to see that the stocks of milk and bread were still fine. I did manage to buy some other perishables to restock our supply at the house. (Apparently ice cream and prepared dinners are the other hot items, as their supply on both was down. But don't need them, either.)

Here's what I found in the soft goods aisle of our favorite store in a nearby town; 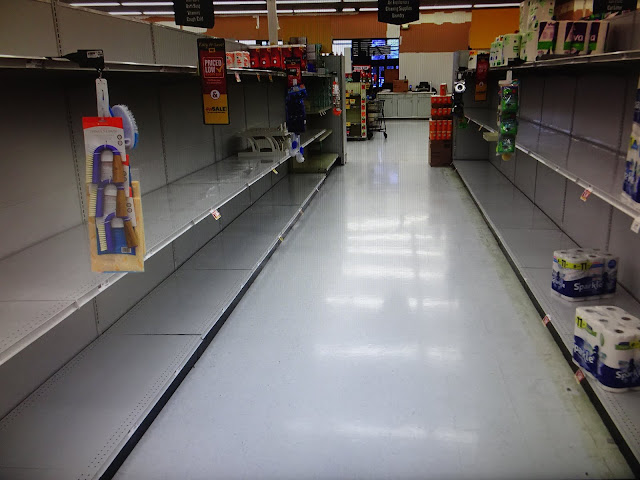 Basically, if you need anything except rolls of paper towels, you're out of luck. Good thing our supply is adequate for a while!

Mandy
Posted by Mandy Sherman at 9:22 AM