IT WAS ANOTHER DAY OF...

Becoming visible requires getting dressed and going out and about, or posting something new on the internet. With “the virus” wrecking lives, careers and families, my greatest goal for the day was to stay home with my wife and avoid anything which might lead to catching the virus. So I have to settle for the internet.

Today my wife had to make a grocery run for a large order…I have been doing the small “milk and bread orders” as needed. The grocery store has senior hours where they try to keep the younger folks at bay to avoid cross pollution.

My hair is in need of some color…but the hair salons are closed. And my gel-coated nails need a fill and a trim…but the nail salons are closed. Fortunately…my nails are light pink. I have been keeping them relatively invisible with a light filing at the place where they grow out, and some very light pink polish. But they are getting long. I wore them longer than this several years back, but since the salons won’t likely re-open till May, they may get a lot longer. Since they look OK , I don’t plan to do anything to them unless I have to. (Despite their negative impact on my typing…)

I wonder if they’ll end up this long again:

Note that the French Tip color was white, and the nail tech made its length appear less than the free growth area, to reduce the “apparent length” of my nails. She thought long nails looked elegant, and wanted my hands to always look their best. They did…and I often got compliments on them “as a lady,” even in androgynous (translation; everyday) mode.

But, as ladies with long nails find out, having pretty nails come with limitations. No, one of them was not breakage. More specifically, movement limitations. As in; typing, pushing buttons, opening car doors, picking up things from the floor, being careful inserting contact lenses, etc. I had to work to avoid doing damage to them (or myself) in everyday life. And strangely enough, my wife never complained about them back then. (That came later…)

I doubt they'll get as long as in the above picture – that took several months to achieve. And they currently are not the French style, But with the virus keeping salons closed for at least the next month, they will get quite a bit longer…and probably not look as nice!

Posted by Mandy Sherman at 11:08 AM No comments:

I have several different color jumper dresses,  like the one below, which I wear with turtleneck blouses around the house with my wife's approval, and out in the yard provided it isn't an all-day project which keeps me out there.  But I haven't tried wearing the outfits on a Mandy excursion yet.  I need some advice as to "do outfits like this look OK for all-day wear, while traveling?"

Interestingly, the above picture taken 3.29.20 seems to confirm what I've seen in the mirror...my breasts seem to be growing, even though the scale says I've lost a little weight.  You can see a dark area above each breast in the above picture, from a little bit of protrusion.  It's more noticeable in the mirror each morning than here.  But i guess it means that one of these days, I should seek to be professionally measured for a properly-sized bra.

The doctor mentioned breast growth as a possibility a while back, so i wouldn't be surprised if it happens as a side effect of one of my meds.  (No, I'm NOT on HRT.)   I didn''t outwardly cheer, but I wanted to.    I couldn't be so lucky as to need an A-cup bra! 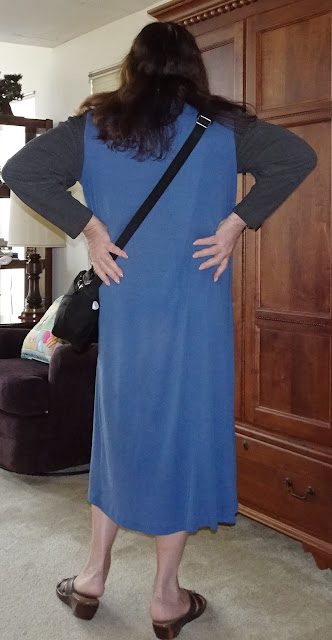 Below is my holiday outfit, taken several years ago.  Barefoot of course, as I typically am around the house: 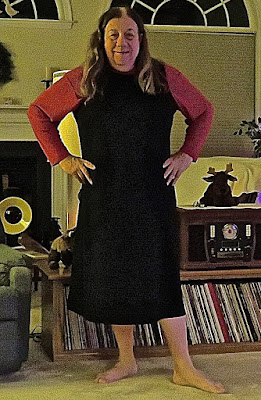 Would any of you be willing to hazard an opinion as to whether outfits like these look attractive enough to actually wear on some of my trips?   (With sandals or ballet flats, of course.)   It would give me so many more options in my wardrobe, and laundry wouldn't be an issue as they are already laundered regularly at home.

Thanks in advance, girls...


We live on the Delmarva, where, unlike Washington DC/Baltimore areas and their suburbs, there are only a few cases of the new virus. And public schools throughout Maryland are all closed until the end of April. Out of an abundance of caution, we're following the published rules of social distancing, and only going out for visits to the grocery store and pharmacy. (Needless to say, the gasoline bills have shrunk significantly.) Mom's nursing home is locked down, thus no visiting. Fortunately they have had no cases of the virus thus far.

Walking around the neighborhood for exercise is permissible if we maintain the required separation, and we have done that a few times. Anything to alleviate the boredom...the telly isn't all that much help! Too much coverage of the virus...there IS other news! And home shopping doesn't help much, either.

As for Mandy, there hasn't been any Mandy time lately, and with the virus lurking out there in the wings, there simply aren't any excursions in the planning stages, nor any safe excursions to plan for. A trip to TN to see the kids is certainly on our to-do list, and I hope it can be taken in the near future. But cases are increasing rapidly there (a nursing home near Nashville was just evacuated due to the virus), and we will take no chances until the all-clear is given for MD, VA and TN. We don't need to get stuck in quarantine for 14 days when we cross state lines, when we arrive there, or when we get home.

My posting may be less frequent till things start to ease up, so please bear with me...

To all my readers: please follow all instructions given. By all means, be safe - and well!

Never had this happen before!


Recently, my wife and I were seated at a diner about 150 miles from home, and the thirty-something female server with VERY short (translation: not feminine at all) hair said “Hi girls…what can I get you to drink?”  We both asked for “just water, please.”  And with that, she took off to get it for us.  I made no attempt to soften my voice, and I was wearing androgynous women’s shorts, flats, and polo top.  She may have seen my purse and nails when I walked in…but I’ll never know.

Then came the absolutely amazing part.

When she returned with our drinks, she apologized profusely for mis-gendering me, and said she simply assumed I was a girl because of “your beautiful long hair.  And I get mistaken for a boy all the time, so I know how that feels.  Once again, I’m so sorry!”   My wife remained silent (though I didn’t notice her blushing or anything like that.)   But I thanked the server for her compliment about my hair, and accepted her apology (though I wasn’t at all offended…LOL!)   She treated us very well the rest of our meal, arranged for an extra big helping of dessert, and we left a nice tip.

Usually once I’m accepted as a girl, most folks continue that acceptance, even once the revelation strikes them that I’m not what I seem to be.  So this was very unusual…and my wife was also surprised.  (But after it happened, she didn’t mention it again.  Nothing else was said.)

On to the next topic:

During a recent trip through PA, we managed to become prosperous!  As long as that condition can be achieved by visiting Prosperity…a tiny Pennsylvania “burg” by that name.  Not a big town by any means (and it’s halfway between nowhere and nowhere else), but there is still an open post office, and some of the homes are old but very pretty.  A picture of the post office is below: 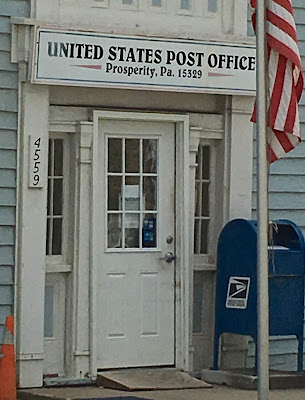 Legend has it that the name came from the enthusiasm of the original settlers, who were anxious to do well in the future.  So they named their town “Prosperity.”    Can’t say that their plan worked, but the place was far from decrepit, as so many rural communities are.

I guess it all depends on your interpretation of “prosperity.”

After a decent night’s rest at the hotel, it was time to check out the part of the Riverwalk which I had not covered the previous day.  On my way to the car with the first load of my things, the man who checked me in the previous day said “Good Morning, Ms. Sherman.”  (I was wearing a different skirt and blouse…

Of course I responded appropriately, and after the pleasantries, I inquired as to whether anything had been decided as to an adjustment due to their not having my reservation when I checked in (despite my written email proof.)  “We’ll have that info when you check out.”

So I made another trip to the room, finished loading the car, and checked out.  And found that they had awarded extra points to my frequent traveler account as the mainstay of their “adjustment.”  But in addition, I was surprised when the man offered to “take you to breakfast this morning, on me.”  since their facility does not offer a free continental breakfast  Initially I interpreted it as a nice gesture in an effort to apologize for the mix-up when I checked in.  But I had to move on, and in fact, I’d brought my own breakfast from home. I politely declined.  So he  gave me his card with an offer to make it happen on my next visit…

That made me begin to wonder…was his breakfast treat an “official part of the hotel’s apology” or was the guy kinda-sorta “making a pass at me and asking for a date?”   That certainly would be a  “first” – but something  in which I have no interest    I can smile just a bit at the mere thought of “it being a pass”, but in reality, I suppose I’ll never know.   And that’s a good thing!  (In the event I end up in town sometime in the future, I’ll most likely use another hotel…especially if I’m with my wife!)

After checking out, I drove to the Riverwalk and parked the car.  It was time to check out the other half of it.   A very pleasant walk…past an empty outdoor beer garden which I had seen from its other entrance the night before when it was open.  It certainly looked different when quiet and lifeless.

On the Riverwalk was some sort of event center with pub, which catered to the 20-something set, and on a Saturday morning it was booming…with loud modern music “literally booming.”  Young folks were standing around talking, and I was expecting at the very least, stares – or possibly even comments.  No worries…it didn’t happen.  I strolled right on through the crowds, without noticing any “stares or side glances.”  And definitely no comments.  (Yes – sunglasses, even at that early hour – are wonderful!)

And as I looked out along the river, there was a crew out practicing their rowing.   Well, almost all of them…a couple of them seemed to be barking the orders! 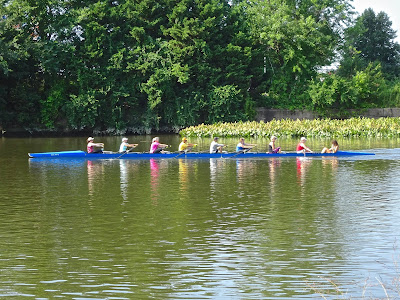 In the shadow of the Amtrak station and elevated Northeast Corridor trackage, is the old Baltimore and Ohio station.  A bank took it over, and repurposed it…which is better than seeing history destroyed!  (The road in front was apparently the former right-of-way!) 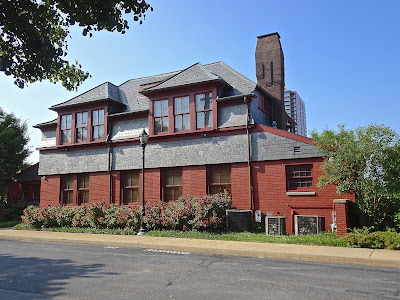 At that point,, my objectives had been met.  I reversed direction to walk back to my car.  But I took a moment to get a pic to share with you: 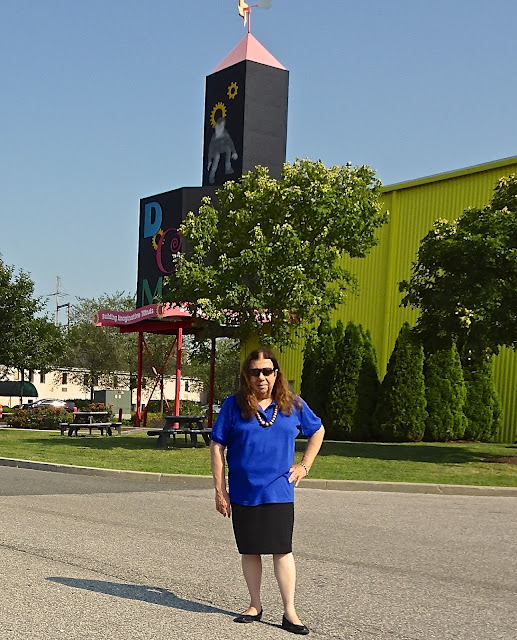 It was a fun day…and now I await my next adventure…whenever and wherever it may be!

Mandy
Posted by Mandy Sherman at 1:50 AM 2 comments: